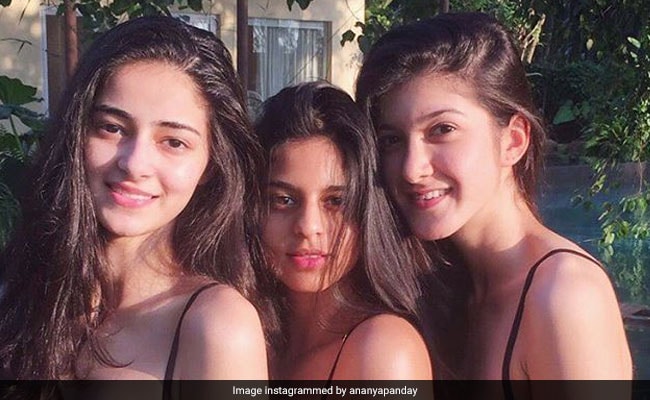 Ananya Panday, who makes her Bollywood debut tomorrow in Punit Malhotra-directed Student Of The Year 2, can hardly wait for her best friends Suhana Khan and Shanaya Kapoor to join her in showbiz, she told mid-day. Ananya, daughter of Bhavana and Chunky Panday, told mid-day: "It has been our collective dream to become actors. I hope Suhana and Shanaya join the industry soon because they both are so talented." Suhana is the daughter of Gauri and Shah Rukh khan while Shanaya, who is currently working as assistant director on the Gunjan Saxena biopic, is Sanjay and Maheep Kapoor's daughter.

Ananya Panday added: "When we were young, during our family gatherings, we would put together shows and perform in front of our parents. Shah Rukh sir would record us on a handycam, and we would make short films out of them."

Sanjay Kapoor recently told Pinkvilla that Shanaya intends to be an actor and that the Gunjan Saxena biopic is Shanaya's prep work for her full-fledged Bollywood debut. "Before she wanted to take up a film, she didn't want to be abroad for a three-year-course. Instead, she chose something personal like this," he said.

Suhana Khan has already featured on a magazine cover and in the accompanying interview she said in affirmative that she wants to be an actor. "My parents only realised I was serious about acting when they saw a performance of mine for the first time. I was playing Miranda in a school performance of The Tempest," she told Vogue.

Meanwhile, Ananya Panday has signed her second film - Pati Patni Aur Woh remake - even before the release of Student Of The Year 2. Speaking of which she told news agency IANS: "I think for my casting of Pati Patni Aur Woh remake the makers saw my ad film which I did for a brand and they decided to cast me in the film. I am thankful for the chance and I have a lot more work to do in cinema."