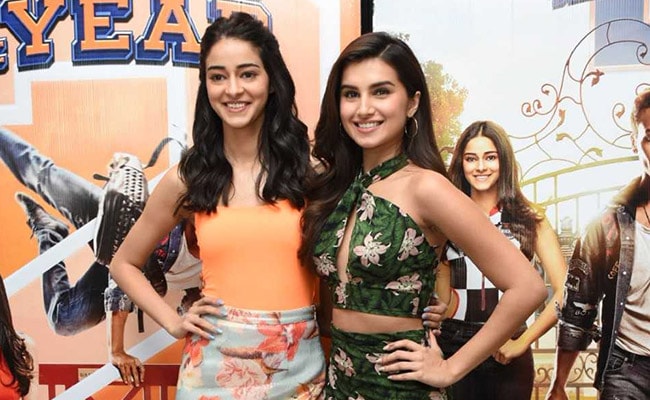 Ananya Panday and Tara Sutaria debut in Student Of The Year 2.

Whether it is Sara Ali Khan, Tara Sutaria and Ananya Panday - all these young debutantes signed their second film even before their first big Bollywood film hit the big screen. They find it more than exciting but an expert believes that the demand for diverse content and popularity on social media makes these newcomers stars even before the release of their films. Last year, Sara made her Bollywood debut with Kedarnath. And soon after that the commercial potboiler Simmba released.

Ananya and Tara, who are being launched with Student Of The Year 2, have already signed for Pati Patni Aur Woh remake and Marjaavaan respectively.

On the opportunities coming her way, Ananya, daughter of actor Chunky Panday, said: "I think this is a very exciting time to be here. I think for my casting of Pati Patni Aur Woh the makers saw my ad film which I did for a brand and they decided to cast me in the film. I am thankful for the chance and I have a lot more work to do in cinema."

According to trade analyst Atul Mohan, the rise in demand of different content and stories is opening up the space for new talent, and producers are taking calculated risk by signing them. "If we look at all the three youngsters, they are already popular among millennials on social media even before their film release. When a production house signs a talent, the audience can see who is launching them. If Karan Johar is launching a talent, he must have seen some amount of potential in them."

"Youngsters these days, thanks to social media, are building their fan following even before their films hit the big screen. So there is a desire that the audience have to watch them in the cinema," Atul Mohan said.

He said that gone were the days when earnings of an actor's debut film became the deciding factor.

"It is the talent really. If the audience loved you on-screen and the film did average business, even then a newcomer can bag a good film. Perhaps reviews from audience and critics matters," said Atul Mohan.

Tara, who has been associated with showbiz for a while, feels she is lucky to have more films on her lap even before her maiden movie released. "I have just finished shooting for Marjaavaan and I will start working on RX 100 remake, which is Ahan Shetty's debut. It rarely happens to any newcomer that she gets a chance to work in three films in a year. My second film got over even before the release of my debut," she said. "When I gave an audition for Student Of The Year 2, I did not even think that I will get another film offer so soon. So for me, it is surreal."

"For me, it is better to know where I am falling short as an actor. Let the criticism come and I hope to take them in the best way possible," she said.

Constructive criticism, Atul Mohan said, always helps new talent. "When you are an established star, the review does not matter, but box office numbers do. Salman Khan is an example of that. For years, Salman's fans have gone to the theatre to watch his style and no matter what critics say, his films do good business," he said.