On Monday, Ananya Panday and Kartik Aaryan shared a photo from their first day on sets on their respective Instagram timelines 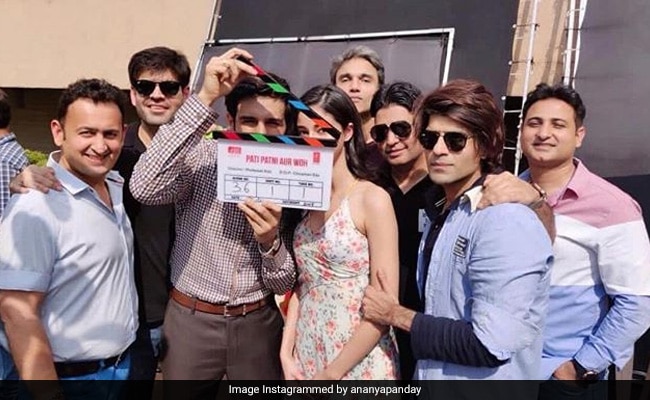 Ananya Panday and Kartik Aaryan have started shooting for Pati Patni Aur Woh Remake, which also stars Bhumi Pednekar. On Monday, Ananya and Kartik shared a photo from their first day on sets on their respective Instagram timelines. In the photo, Kartik and Ananya can be seen standing next to Mudassar Aziz, who is directing the film and producers Bhushan Kumar and Juno Chopra. Bhumi Pednekar, who is playing the second lead in the film, is not part of the picture. Kartik and Ananya's face can be seen covered with the film's clapboard. "Shubh arambh. First Day with Patni Aur Woh. Clap to be removed soon," read Kartik Aaryan's caption for the picture. Directed by B R Chopra, Pati Patni Aur Woh starred Sanjeev Kumar, Vidya Sinha and Ranjeeta in the lead roles.

Ananya Panday is making her Bollywood debut with Punit Malhotra's Student Of The Year 2 in 2019 and the Mudassar Aziz-directed film will be her second movie. Earlier, had shared a picture with the cast of the film on her Instagram profile and wrote: "Super stoked to start this roller coaster ride. Pati Patni Aur Woh."

The release date of the Mudassar Aziz-directed film has not been announced yet.