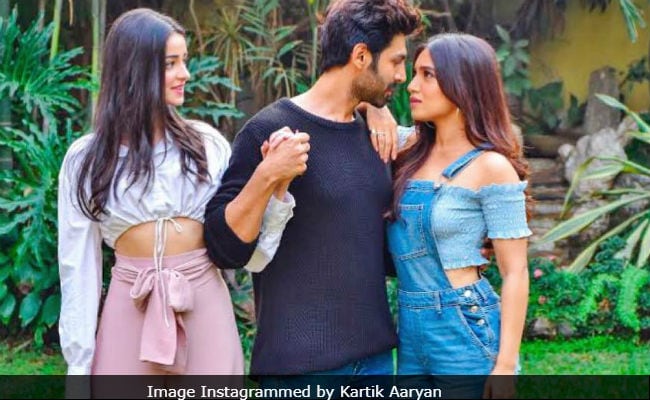 Ananya Panday, Kartik Aaryan and Bhumi Pednekar occupied a spot on the trends list all of Saturday. Why, you asked? Well, the trio is all set to co-star in the remake of B R Chopra's 1978 film Pati Patni Aur Woh, which starred Sanjeev Kumar, Vidya Sinha and Ranjeeta in the lead roles. The film will be directed by Happy Phirr Bhag Jayegi director Mudassar Aziz and it will collaboratively be produced by Bhushan Kumar, Juno Chopra and Abhay Chopra. Pati Patni Aur Woh is expected to go on floors in February this year. Ananya Panday, who will make her Bollywood debut with Punit Malhotra's Student Of The Year 2 this year, shared a picture with the cast of the film on her Instagram profile and wrote: "Super stoked to start this roller coaster ride. Pati Patni Aur Woh"

Meanwhile, Kartik Aaryan, who will be seen playing the lead role in the Mudassar Aziz-directed film, shared another picture of himself along with his co-stars Ananya and Bhumi and wrote: "Patni Ya Woh ? Super excited to work with Bhumi Pednekar and Ananya Paanday!" The Sonu Ke Titu Ki Sweety actor added, "Pati ki bajegi band, patni aur who k beech. Madness is about to begin."

This is the first time that Kartik, Aryan and Bhumi will be seen sharing screen space. Bhushan Kumar, who is one of the producers of the film, said in a statement, "We had a great synergy with BR Studios when we worked on Bhoothnath Returns a few years ago. We are happy to produce Pati Patni Aur Who with them." The T-Series owner added, "Juno, Abhay and Mudassar have given an interesting tweak to the story that matches today's times. Kartik, Bhumi and Ananya are new age actors who are talented and add their spark to the story."

The 1978 film Pati Patni Aur Woh, directed by B R Chopra is a comedy drama that showcases the story of a married couple played by Sanjeev Kumar and Vidya Sinha and the challenges their relationship faces when Sanjeev Kumar has an extramarital affair with Ranjeeta's character.