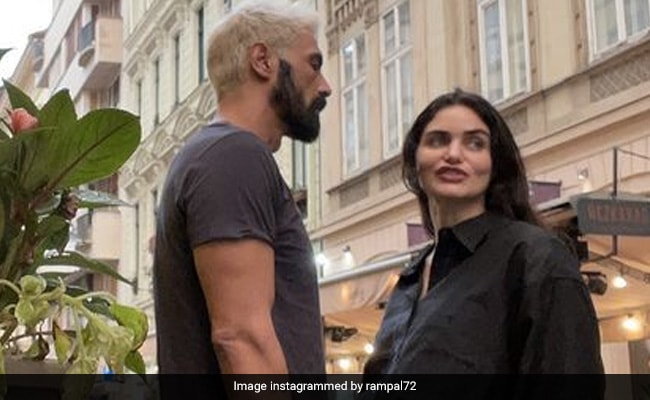 Actor Arjun Rampal is spending some quality time with his girlfriend, model Gabriella Demetriades, and their son, Arik, in Budapest. The 48-year-old has been keeping his fans clued in on what the family is up to in the European city with some stunning photos. From posing together on the streets of Hungary to giving us a glimpse of some pretty monuments, the couple has us hooked to their Instagram timeline. And now, Arjun Rampal has shared lovely images of himself with Gabriella and their son Arik. In the first image, Arjun Rampal is seen having a chat with Gabriella on a street in Budapest.  The second image, meanwhile, is a cute selfie of the father-son duo.

Along with the beautiful pictures, Arjun Rampal wrote, "What's the plan? Fam?" Well, it looked like Gabriella is not one of those people who has a tough time making up her mind. She promptly replied saying, "Waiting to go eat." Actor-host Rannvijay Singha replied to the post with a heart emoji.

Arjun Rampal, who is currently in Budapest to shoot for his upcoming film Dhaakad, said in a separate post that he was grateful to be back on the sets of a film. Along with a beautifully framed image that places him in front of a doorway, the actor wrote, "Back on set. Back to work. Feel blessed and filled with gratitude," with the hashtags "team Dhaakad" and "Budapest", among others.

Work aside, the actor also shared a sweet image of Gabriella walking the streets of Budapest with Arik in a stroller. The model can be seen in an oversized white shirt that looks classic and comfortable at the same time. And in case you are wondering, Arjun Rampal confirmed in the caption that Gabriella was, in fact, wearing his shirt. In the post, he wrote, "When she borrows my shirt to take our son out for a stroll." Adorable, isn't it?

The couple has been having a gala time in the Hungary capital and the many pictures on their timeline are proof. Sharing a bunch of stills, Gabriella wrote, "Hope everyone gets their own holiday soon."

Here are some of the images from their European getaway:

Arjun Rampal was last seen as a lawyer in the web series Nail Polish, alongside Manav Kaul.