Arjun Rampal is spending some time with his family in Budapest 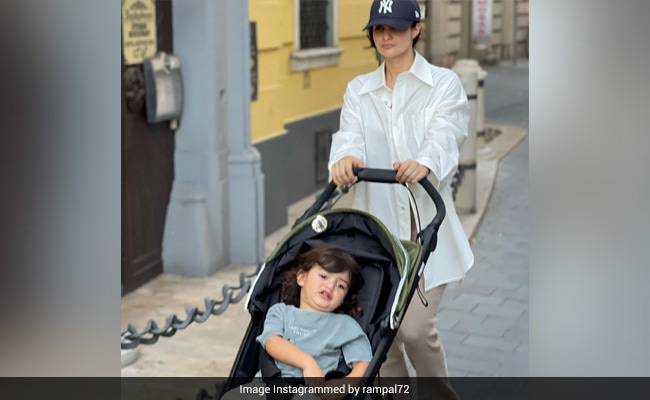 Arjun Rampal and his girlfriend, fashion designer Gabriella Demetriades, have been melting our hearts past few days with their adorable postcards from Budapest. Adding more pictures to his Budapest diaries, Arjun Rampal, on Wednesday, dropped two brand new pictures of Gabriella on Instagram. The pictures also feature the couple's baby son Arik, who can be seen sitting in a stroller pram. Gabriella Demetriades, who has always been a stunner when it comes to her fashion choices, can be seen rocking the oversized shirt look in the pictures. Yes, you guessed it right, Gabriella is actually wearing Arjun Rampal's shirt in the picture. How we know this? Courtesy, Arjun Rampal's Instagram caption. Pouring his love for Gabriella in his caption, Arjun wrote: "When she borrows my shirt to take our son out for a stroll." If these aren't couple goals, we don't know what is.

Arjun has gone to Budapest for the shoot of his upcoming film Dhaakad. Before getting started with work, the actor decided to spend some time with his girlfriend and son. The family of three seems to be having a blast in Budapest and proof of that is their Instagram entries.

Last week, Arjun dropped a bunch of pictures of himself, Gabriella and Arik on Instagram. In the pictures, they can be seen exploring Budapest. "Some quality time with the family. Before I get to work," Arjun wrote in the caption of the post.

Gabriella too has been sharing pictures on her Instagram feed and we love her sartorial choices.

Here are some pictures of Gabriella Demetriades making heads turn in Budapest with her style statements:

Coming back to Arjun Rampal, as mentioned above, the 48-year-old actor is all set to begin shooting for the next schedule of his upcoming film Dhaakad. The movie features actress Kangana Ranaut in the lead role, while Arjun Rampal will be seen playing the role of the antagonist. The movie is expected to open in theatres on October 1 this year.