"I don't think I would've been able to do any of it without Sushant," Sara Ali Khan said 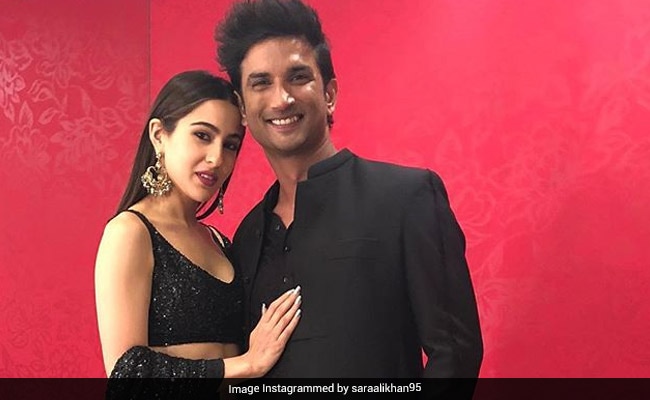 A throwback video of Sara Ali Khan and late actor Sushant Singh Rajput is doing the rounds on social media. In the video, which appears to be from the promotions of Sara's debut film Kedarnath, the actress says that she wouldn't have been able to perform without the help of Sushant, who was her first co-star. "I don't know how I've done in the film. I've really, really tried my best. But I don't think I would've been able to do any of it without Sushant. He has just been the most helpful person to have had," said Sara, adding that the actor taught her how to speak in Hindi. "There were days when I was a little lost, I was a little scared, but he was just always hands-on. Whatever broken Hindi I speak, Sushant has taught me," said Sara. Sushant Singh Rajput was found dead at home in Mumbai on June 14 and police say it was by suicide.

Sara remembered Sushant Singh Rajput by sharing a throwback picture from the sets of Kedarnath with a broken heart emoticon.

In 2019, when Sara Ali Khan's debut film Kedarnath clocked an year, the actress thanked her co-star Sushant Singh Rajput and wrote: "I truly appreciate all that you did to support me and help me consistently throughout this journey, I couldn't have asked for a better Pithoo to carry me through all of this."

I can't believe it's been a year since everyone met Mukku for the first time. Kedarnath has been and will always remain an integral part of me. Thank you @gattukapoor and @kanika.d for making me meet, imbibe and portray Mukku @sushantsinghrajput I truly appreciate all that you did to support me and help me consistently throughout this journey, I couldn't have asked for a better Pithoo to carry me through all of this! Thank you Tushar Sir for shooting this film with so much love @jehanhanda thank you for constantly having your eyes on me and always having my back And thank you to all the people that have accepted me, given me so much love and allowed me to be a humble part of the Indian film industry for a year now! #jaibholenath

After his star-making performance as the lead on the show Pavitra Rishta, Sushant Singh Rajput made his film debut in 2013's Kai Po Che! His impressive filmography includes Kedarnath, MS Dhoni: The Untold Story, Raabta, Chhichhore and Detective Byomkesh Bakshy! Mr Rajput was last seen in 2019's Drive and had a film called Dil Bechara ready for release before the coronavirus lockdown hit.