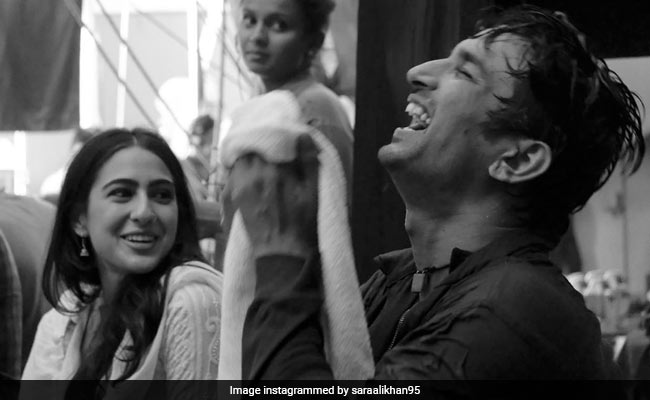 On Sunday afternoon, Bollywood was left reeling from the shock of losing actor Sushant Singh Rajput who was found dead in his Mumbai home. Police, who say the actor died by suicide, are investigating, reported news agency PTI. No suicide note was found. Sushant Singh Rajput was 34. Social media was deluged by tributes from many members of the film fraternity, including Shah Rukh Khan, Anushka Sharma, Akshay Kumar, Ekta Kapoor and Abhishek Bachchan among others. Sara Ali Khan, who worked with Mr Rajput in her debut film Kedarnath, shared a cherished memory in the form of a throwback picture with the late actor on her Instagram profile. The film marked Sara and Sushant's first and last collaboration in Bollywood. A grieving Sara posted a few broken heart emoticons to sum up her emotions.

Abhishek Kapoor, who directed Sushant Singh Rajput in Kedarnath and also in the late actor's debut film Kai Po Che!, wrote: "I am shocked and deeply saddened by the loss of my friend. We made two very special films together. He was a generous and fabulous actor, who worked very hard to breathe life into his characters. I pray for his family, whose loss is unmeasurable. He was a huge science buff and what consumed by what lay beyond in the universe. I'm going to miss you brother. Stay interstellar."

In 2019, when Kedarnath clocked an year, Sara Ali Khan shared a post on her Instagram profile, in which she acknowledged the film's director Abhishek Kapoor and her co-star Sushant. An excerpt from her post read, "Sushant Singh Rajput, I truly appreciate all that you did to support me and help me consistently throughout this journey, I couldn't have asked for a better Pithoo to carry me through all of this."

I can't believe it's been a year since everyone met Mukku for the first time. Kedarnath has been and will always remain an integral part of me. Thank you @gattukapoor and @kanika.d for making me meet, imbibe and portray Mukku @sushantsinghrajput I truly appreciate all that you did to support me and help me consistently throughout this journey, I couldn't have asked for a better Pithoo to carry me through all of this! Thank you Tushar Sir for shooting this film with so much love @jehanhanda thank you for constantly having your eyes on me and always having my back And thank you to all the people that have accepted me, given me so much love and allowed me to be a humble part of the Indian film industry for a year now! #jaibholenath

The 2018 film Kedarnath was a love story, set against the backdrop of the devastating Kedarnath floods of 2013. It showcased the life of a Muslim porter (played by Sushant Singh Rajput) and a young Hindu woman (played by Sara Ali Khan), who fell in love under harsh circumstances.

Sushant Singh Rajput, star of films like MS Dhoni: The Untold Story, Kedarnath, Chhichhore and Sonchiriya, was last seen in the 2019 Netflix film Drive, in which he co-starred with Jacqueline Fernandez.