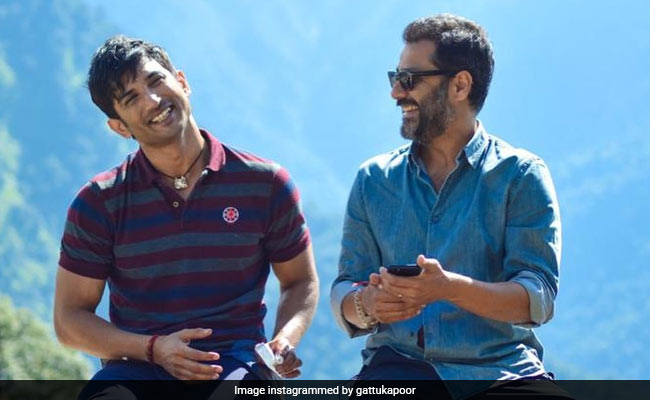 Bollywood actor Sushant Singh Rajput's death has left not a single heart unbroken, not a single eye dry. Mr Rajput, 34, was found dead in his Mumbai home. He died by suicide, Mumbai police told PTI. Filmmaker Abhishek Kapoor, who gave Sushant Singh Rajput his Bollywood break with the 2013 film Kai Po Che!, and later collaborated with the actor in the 2018 film Kedarnath, in his eulogy piece, wrote about Mr Rajput's love for science and the cosmos, and shared his experience of working with him. He signed off the post saying, "I'm going to miss you brother. Stay interstellar."

Sharing a memory in the form of a throwback picture from the sets of Kedarnath, Abhishek Kapoor wrote, "I am shocked and deeply saddened by the loss of my friend. We made two very special films together. He was a generous and fabulous actor, who worked very hard to breathe life into his characters. I pray for his family, whose loss is unmeasurable. He was a huge science buff and what consumed by what lay beyond in the universe. I'm going to miss you brother. Stay interstellar."

Sushant Singh Rajput's debut film Kai Po Che!, directed by Abhishek Kapoor, was based on Chetan Bhagat's novel The 3 Mistakes of My Life. Rajkummar Rao, who co-starred with Sushant in him in Kai Po Che!, and later in Raabta, wrote: "This is so unfair. Gone too soon.I'll always cherish our conversations on acting and cinema. You'll be missed bhai. May God give strength to his family and loved ones. Rest in Peace brother."

This is so unfair. Gone too soon. I'll always cherish our conversations on acting and cinema. You'll be missed bhai. May God give strength to his family and loved ones. Rest in Peace brother.

A heartbroken Amit Sadh, who starred as Sushant Singh Rajput's onscreen bestie in Kai Po Che!, wrote: "I am sorry, I did not come to your rescue. Will regret all my life for not reaching out. Right now, very sad but will cherish the time we shared filming Kai Po Che!. I am broken."

Mr Rajput's second project with Abhishek Kapoor was the 2018 film Kedarnath, also starring Sara Ali Khan. The film was set against the backdrop of the devastating Kedarnath floods of 2013. The film was critically acclaimed and Sushant Singh Rajput received massive praise for his performance in the film.