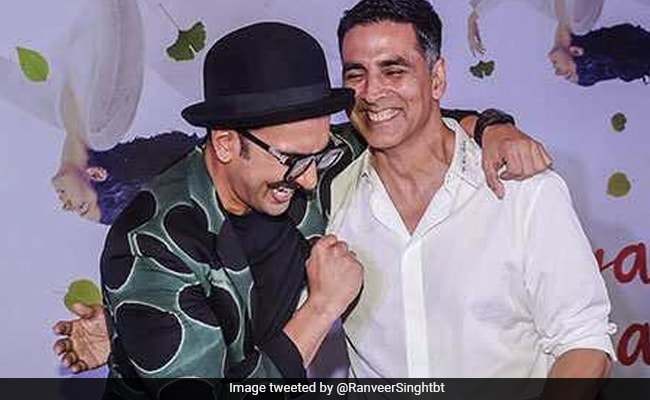 Ranveer Singh is a true blue Akshay Kumar fan boy. On Thursday, Ranveer crashed Akshay Kumar's Instagram Live session with TV host Bear Grylls multiple times with his hilarious comments. Huma Qureshi, Akshay Kumar's Bell Bottom co-star, who is currently shooting for the film in Scotland, moderated the session and read the comments out loud. Ranveer began by wishing Akshay Kumar a belated happy birthday. He later complimented the actor for his moustache and wrote :"Mooch looks kadak, Akki (the moustache looks good)." Wait, it gets better. Ranveer, who has a cameo in Akshay's upcoming film Sooryavanshi, also wrote: "Akki Sir, Sooryavanshi release karwao." The film was earlier supposed to release in March this year, but it was shifted due to the coronavirus pandemic. The film will reportedly release on Diwali.

A fan club dedicated to Akshay, curated one of the many comments posted by Ranveer Singh during the session.

Akshay Kumar and Ranveer Singh are co-stars of Simmba and Sooryavanshi. Akshay made a guest appearance in Ranveer's 2018 film, directed by Rohit Shetty.

Akshay Kumar has an impressive line-up of films that includes Bell Bottom (for which he is currently shooting in UK), Prithviraj, Laxmmi Bomb and Bachchan Pandey. He has also signed Aanand L Rai's Atrangi Re, co-starring Sara Ali Khan and Dhanush.