Into The Wild: How Akshay Kumar And Bear Grylls Found "Brotherhood" In The Wilderness 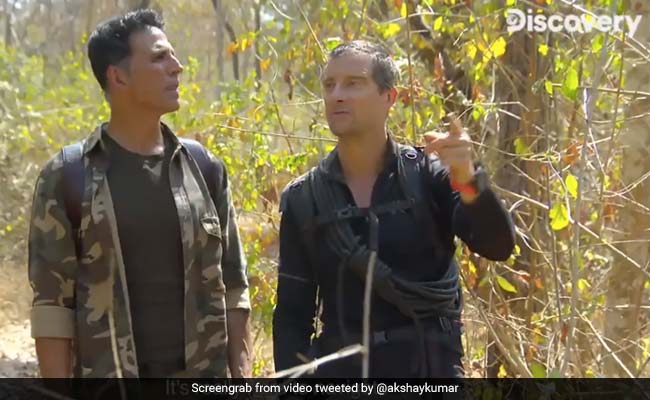 Akshay Kumar, who went into the wild with Bear Grylls, found way more than just adventure on the show. He found "brotherhood." In his latest Twitter post, Akshay Kumar shared a clip from the TV show Into The Wild With Bear Grylls and summed up his experience of featuring in one of the episodes in the best possible way. He wrote in his caption: "When a Western adrenaline adventurer meets an Eastern action junkie, don't expect fireworks because brotherhood is what we found. 2 fitness enthusiasts enjoying a stroll through wilderness is what I call a perfect walk in the park. Here's a preview Into The Wild With Bear Grylls."

In the video clip, the show's host Bear Grylls introduced Akshay Kumar like this: "The guy I am about to meet is known for his martial arts skills. The one and only legend AK." During the course of the video, the duo is seen surviving in the wild, climbing up trees, talking about their source of inspirations and consuming elephant poop tea. Check out the video here:

When a Western Adrenaline Adventurer meets an Eastern Action Junkie,dont expect fireworks coz Brotherhood is what we found.2 fitness enthusiasts enjoying a stroll through wilderness is what I call a perfect walk in the park. Here's a preview #IntoTheWildWithBearGrylls@BearGryllspic.twitter.com/eWXibJBqOc

Last week, Akshay Kumar shared a post based on the popular "Rasode Mein Kaun Tha" meme template and shared a picture with Bear Grylls. He wrote in his post: "Rasode mein Bear tha. Any guesses on what is he cooking?"

The episode of Into The Wild, featuring Akshay Kumar, will premiere for Discovery Plus India members on September 11 at 8 pm while it will air on Discovery channel at 8 pm on September 14.