On Akshay Kumar's Birthday, Presenting A New Look From His Film Bell Bottom 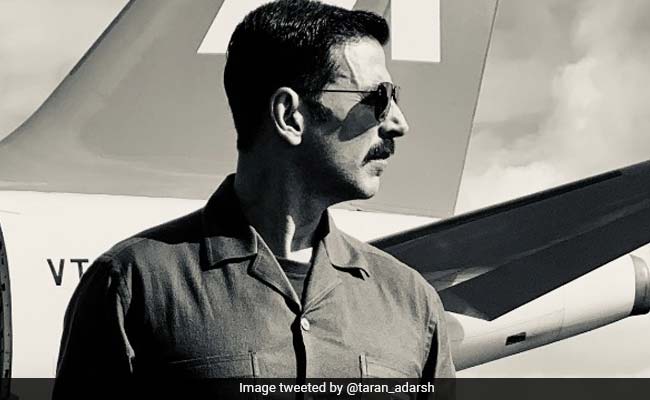 What can be a possibly better way of celebrating an actor's birthday than acknowledging his body of work and that is exactly what happened this morning, on Akshay Kumar's 53rd birthday. The makers of his forthcoming film Bell Bottom shared his new look from the film and we just love it. The makers of the film as well as Akshay Kumar's Bell Bottom co-stars shared the picture of the birthday boy on social media. In the greyscale picture, Akshay Kumar can be seen dressed to the point of perfection as he poses in front of what appears to be a plane. Akshay, wearing sunglasses and sporting a moustache, looks charming as ever in the picture. Akshay Kumar's co-star from the film Vaani Kapoor shared a picture on social media and she wrote:"Throwback to the 80s. Introducing the suave retro look of Akshay Kumar from Bell Bottom.

Throwback to the 80s!!
Introducing the suave retro look of @akshaykumar from #Bellbottom!@humasqureshi@LaraDutta@ranjit_tiwari@jackkybhagnani@honeybhagnani@monishaadvani@madhubhojwani@nikkhiladvani@EmmayEntertain@poojafilmspic.twitter.com/avqbJD5joI

Akshay Kumar is currently shooting for the film in Glasgow, Scotland. Last week, BTS pictures from the shoot surfaced on social media and they trended big time. Akshay Kumar reportedly plays a RAW agent in the espionage drama, which is being directed by Ranjit M Tewari.

Akshay Kumar shared his first look from the espionage drama, last year. He wrote: "Get ready to go back to the 80s and hop onto a roller-coaster spy ride Bell Bottom." ICYMI, check it out here:

Other than Akshay Kumar, the film also stars Vaani Kapoor, Huma Qureshi and Lara Dutta. Bell Bottom is the first film to shoot at an international location since productions were stopped because of the lockdown. The film will collaboratively be produced by Vashu Bhagnani, Jackky Bhagnani, Deepshikha Deshmukh, Monisha Advani, Madhu Bhojwani and Nikkhil Advani.