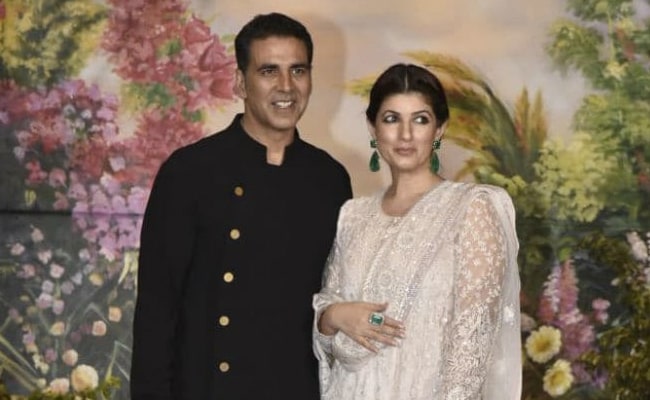 Akshay Kumar should have known better than taking Twinkle Khanna's "freshly washed, pretty" mask. The reason we brought this up today is because Twinkle Khanna recently posted a tweet, reminding her husband Akshay to get his own mask and not use her "pretty" one. Akshay Kumar featured in a public service announcement video, in which he reminded his fans to wear their face masks before stepping out of their houses and the one that he can be seen wearing in the video, happens to belong to Mrs Funnybones. Reacting to Akshay's video, Twinkle wrote: "Also get your own mask and don't rob your partner's freshly washed, pretty, floral one." She added the hashtag #SafeNormal.

Also get your own mask and don't rob your partner's freshly washed, pretty, floral one:) #SafeNormalhttps://t.co/sbATVnZUvC

We love reading Akshay and Twinkle's Twitter conversations. On Menstrual Hygiene Day, this year, Akshay shared a post from his film PadMan and he tagged the film's lead actresses Sonam Kapoor and Radhika Apte but the actor forgot to acknowledge the film's producer Twinkle Khanna and that didn't go unnoticed. Reacting to Akshay's post, Twinkle wrote: "Err.... You are definitely not part of my next production!" However, the actor was quick to apologise. "Please mere pet pe laat mat maro. Missed tagging the team. Apologies to my producer Twinkle Khanna, director R Balki and the man without whom PadMan wouldn't be made - Arunachalam Muruganantham."

Please mere pet pe laat mat maro Missed tagging the team. Apologies to my producer, @mrsfunnybones, director #RBalki and the man without whom Padman wouldn't be made @murugaofficialhttps://t.co/FbrOBSFLjG

Twinkle Khanna and Akshay Kumar co-starred in films such as International Khiladi and Zulmi. They got married on January 17, 2001. The couple are parents to 17-year-old Aarav and Nitara (7).