"May God give you all the happiness in the world," Anupam Kher wrote for Robert De Niro 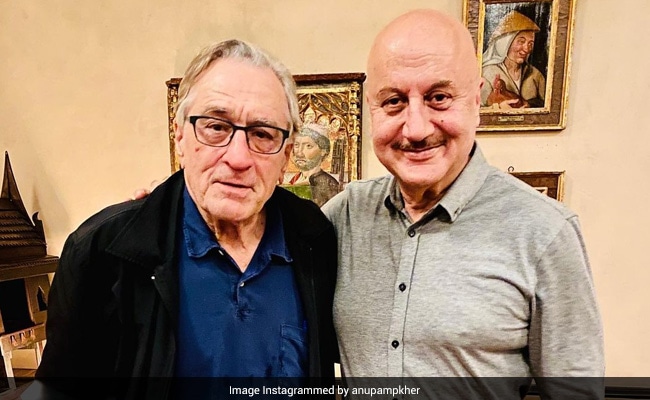 Acting legend Robert De Niro celebrated his 78th birthday on Tuesday. Anupam Kher, who shares a great bond with the actor, extended birthday greetings to him with a special Instagram post. To mark the 78th birthday of the "Godfather of acting," Anupam Kher shared a bunch of pictures from his recent dinner get-together with him. While two pictures feature the duo posing for the camera, the other two feature Anupam Kher presenting his latest book 'Your Best Day Is Today' to Robert De Niro. Anupam Kher poured his heart out in the caption of his post and wished Robert De Niro a "happy and healthy birthday." Anupam Kher wrote: "Dear Mr. #DeNiro! Wishing you a very happy and healthy birthday!! May God give you all the happiness in the world. You have inspired generations of actors all over the world."

He went on to thank the 78-year-old actor for the "delicious dinner" that he put together for him "few days back." Anupam Kher wrote: "On a personal level every moment spent with you is most precious and a big learning experience! Thank you for the most delicious dinner and an amazing evening few days back!! #RobertDeNiro #GodFatherOfActing #Friend #Inspiration #YourBestIsToday."

Anupam Kher and Robert De Niro worked together in the 2012 Hollywood film Silver Linings Playbook. Since then, the duo have been catching up with each other in New York every now and then. In fact, Anupam Kher also celebrated his birthday with Robert De Niro in New York three times in a row from 2018 to 2020.

Nothing can be more magical for an actor than to be able to spend quality time on your birthday with the #GodOfActing#RobertDeNiro third year in a row. I am humbled that Mr. De Niro accepted my lunch invitation. It was magnificent. pic.twitter.com/wUHEUjffAu

Thank you #BarryRosenstein & #Lizanne for hosting an exclusive party for my birthday at your home in New York. I had a great time. And to be able to spend my birthday 2nd year in a tow with my friend #RobertDeNiro is stuff made out of dreams. His warm hug has a blessing in it. pic.twitter.com/3yipxjU3Mu

In terms of work, Anupam Kher was last seen in the 2019 film One Day: Justice Delivered. He will soon be seen in Shiv Shastri Balboa and Vivek Agnihotri's The Last Show.