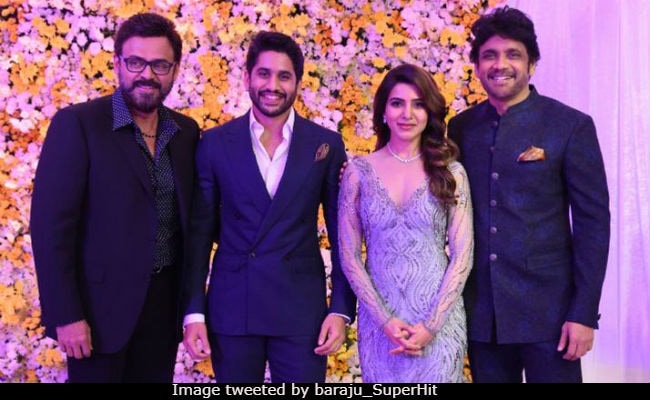 New Delhi: So, finally Samantha Ruth Prabhu and Naga Chaitanya rounded off their wedding celebrations with an extravagant reception in Hyderabad on Sunday. Pictures from the lavish wedding reception have been shared in plenty on social media and reveal the impressive A-list guests which Telugu megastar Nagarjuna sent out invitations to. Samantha and Naga Chaitanya were joined by their close friend Ram Charan while stars like Venkatesh Daggubati, Allu Arjun, Varun Tej and Rakul Preet also made it to the bash. But the spotlight shifted to superstar Chiranjeevi when he greeted and blessed the newly-weds on stage. Samantha looked stunning in an embellished gown while Naga complimented her in blue formals.

Nagarjuna and the couple were also photographed greeting other biggies from the south film industry - filmmaker S S Rajamouli and veteran actors UV Krishnam Raju, Krishna and Nandamuri Harikrishna were all spotted at the reception. The Internet was also thrilled to spot Rana Daggubati, who arrived with his father filmmaker Suresh Daggubati.

Here are the highlights of the Samantha and Naga's Hyderabad wedding reception:

Apart from the lavish decor and a star-studded guest list, Nagarjuna had also ensured a scrumptious spread of South Indian delicacies for the guests, which included Nagarjuna Biryani (named after the superstar), reported Gulte.

Samantha and Naga had a dream-like destination wedding in Goa - they married according to Hindu rituals on October 6, which was followed by a Christian style wedding on October 7. After a grand yet close-knit wedding, the couple took off to London for their honeymoon and returned to work commitments soon after.

Promoted
Listen to the latest songs, only on JioSaavn.com
If you're wondering how life after the grand wedding is at the Nagarjuna household, you have an answer from the superstar himself, as told to IANS in an interview: "I've known Sam for so long. She is a part of our family from long before the marriage. We've been fond of her from a very long time. The only difference is she called me Nag sir earlier. Now she calls me Baba."

Samantha Ruth Prabhu and Naga Chaityana are co-stars of 2010 film Ye Maaya Chesave, their first movie together, on the sets of which they fell in love.