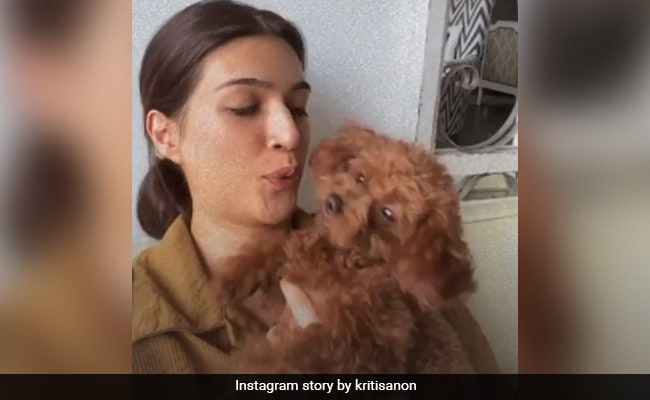 Kriti Sanon woke up to a “slurpy morning.” It's not us but the actress who declared this on social media. The reason being her two adorable pet dogs. Kriti  shared a collage of Boomerang videos on Instagram Stories featuring these two pups. The white one is Disco. He licked Kriti's face lovingly. In the frame below, we see an equally enchanting brown fur baby named Phoebe. She was clearly demanding some love from the actress. Kriti looks stunning in a brown shirt. As for the caption, she wrote, “Slurpy morninggg” along with a dog face emoji. 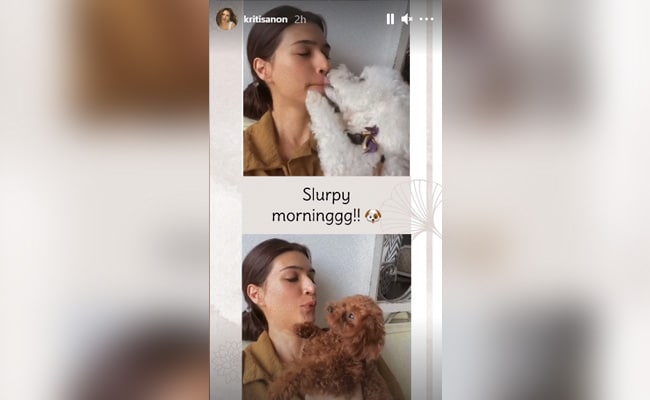 Disco Sanon and Phoebe Sanon, as Kriti prefers calling them, are known to make cute cameos on her Instagram page.  Earlier, the Raabta star shared a clip showcasing the antics of Disco. Here, Kriti plants a kiss on Disco who dramatically wakes up feeling startled. “My munchkin,” she proudly wrote in the caption.

One of her Instagram posts shows how Disco and Phoebe pamper Kriti. In the self-captured video, Kriti gave us a glimpse of the “paw-dorable” start of the day. The dogs can be seen playing and licking her face continuously. Kriti hilariously wrote in the caption, “my morning facial.” Well, where can dog lovers sign up for such facials?

Earlier this year, Kriti  celebrated Phoebe's first birthday as any dog parent would do. The video features her actress-sister Nupur Sanon. She helped Phoebe “cut the cake” while Disco watched them from a distance. "Happy 1st birthday my child, Phoebe. You make my world beautiful and happier," read her caption.

Apart from playing with her pets, Kriti is also juggling between some interesting professional outings. She recently mesmerized fans with a ravishing appearance on celebrity photographer Dabboo Ratnani's calendar.

Kriti will be next seen in films like Mimi, Bhediya, Adipurush, Heropanti 2 and Bachchan Pandey.