We Came For Sophie Turner-Joe Jonas' Wedding Pic, Stayed For The Fantastic Comments

"Sophie Sophie, more than I can take. So beautiful, what a woman," wrote Lena Headey, the formidable Cersei 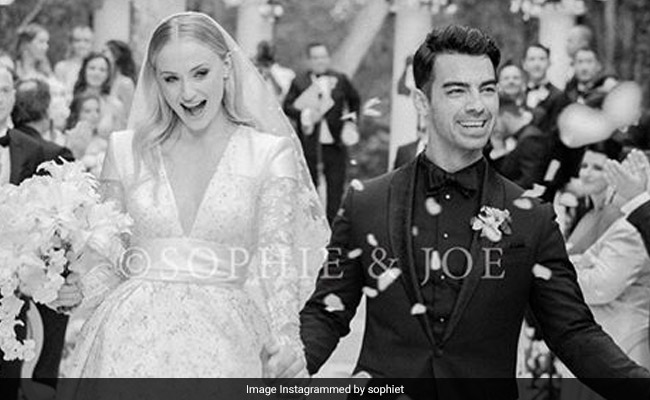 The comments sections on the wedding picture - see above - posted by Sophie Turner and Joe Jonas are, not surprisingly, exploding with messages from the couple's famous friends. Jophie, who married in an impromptu Las Vegas chapel wedding in May, just had a second, grander ceremony in a French chateau with a guest list that included not only family - Priyanka Chopra has been front and centre - but also friends like Sophie's Game Of Thrones co-star Maisie Williams and DJ-music producer Diplo - whose phone was confiscated, because of which we had to wait for Jophie to post their first wedding pic on their official Instagram accounts. Thanks, Diplo.

Anyhow. The comments are lovely. "Such a stunning bride," Danielle Jonas, who is married to third Jonas Brother Kevin, wrote on Sophie's post. Several Game Of Thrones co-stars messaged as well. Lena Headey, the formidable Cersei, wrote: "Sophie Sophie, more than I can take. So beautiful, what a woman." Nathalie Emmanuel, who played Missandei, commented: "Aww you guys. Congratulations! You look stunning." Pilou Asbaek, better known to GoT fans as Euron Greyjoy, wrote: "Only time in my life I wish I was adopted." Sophie's X-Men: Dark Phoenix co-star Jessica Chastain "loved this moment." Actors Olivia Munn, Laura Harrier, Sarah Hyland and Dylan McDermott also left their best wishes as did model Lily Aldridge. 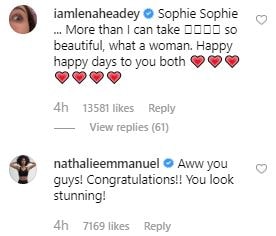 Sophie Turner and Joe Jonas married (again) in a traditional ceremony in the French countryside on June 30. Pictures from several pre-wedding dos have gone viral, many featuring Priyanka Chopra:

Jophie sprung a surprise in May by marrying after the Billboard Awards in Las Vegas. They were outed on social media by Diplo who couldn't do a repeat this time round because, well, of this:

This is the only photo I got from Joe and Sophie Turner Jonas wedding because they took my phone from me and put in a holding cell during the ceremony . Heard it was lovely tho

Sophie Turner is best-known for her roles as Sansa Stark on Game Of Thrones and young Jean Grey in the X-Men films. Joe Jonas makes up a third of the recently re-formed band Jonas Brothers - his brother Nick is married to Priyanka Chopra.