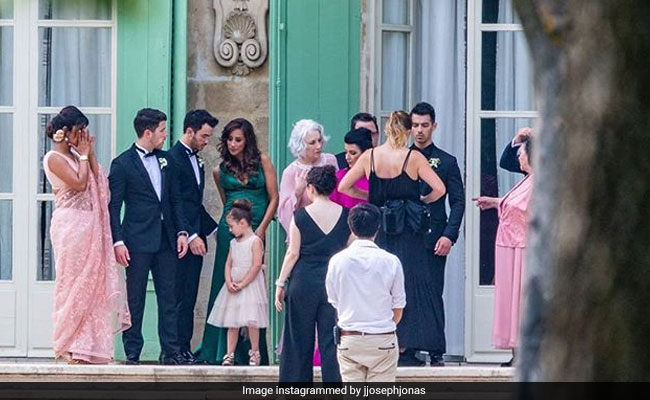 Priyanka Chopra was photographed crying during the photo session, which took place after the official wedding ceremony of Joe Jonas and Sophie Turner in France. Several pictures from the wedding were shared by a fan page dedicated to Jonas Brothers' on Instagram. The pictures also featured Nick Jonas, with whom Priyanka Chopra got married last year in the month of December, Kevin Jonas, Franklin and also their parents Kevin Sr and Denise. The Jonas family was spotted posing for several family photographs during the photo session. There are several candid moments from the session shared by the fan page as well. Take a look here:

Priyanka Chopra wore a candy pink saree by Sabyasachi and styled her hair into a bun. She accessorised her look with pink flowers, which perfectly complemented the saree. Nick Jonas wore a black tuxedo to the wedding. The bride, Sophie Turner wore a traditional white wedding gown whereas singer Joe Jonas wore an all-black tux. Here are some more photos shared by the fan pages:

Joe Jonas and Sophie Tuner got engaged in the year 2017. The couple already had a chapel wedding during the Billboard Music Awards in Las Vegas in the month of May this year. In an interview with Access, Priyanka Chopra described how the decision was made and said: "It was really funny. We were at the Billboards and Joe, I think, had this idea that he wanted to do this. We had these little black cards that we all got and were randomly inviting our friends like people that we met."