"It was so Jophie. I call them Jophie," said Priyanka Chopra 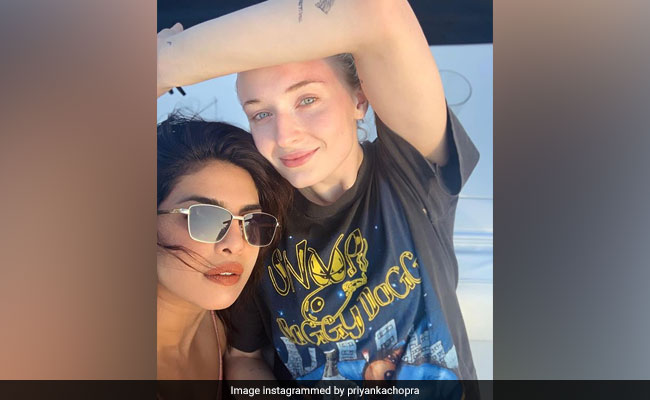 Priyanka Chopra, who was one of the happiest bridesmaids at Sophie Turner and Joe Jonas' chapel wedding last week, spilled the beans on how the Jonases pulled it off in a recent interview with Access. "That was so fun. It was so fun. And it was so Jophie. I call them Jophie. Like trust them to do that... that was Jophie. And they're gonna have this amazing, beautiful wedding obviously (Was I not supposed to say that?)," said Priyanka Chopra before adding that they were handing out invitation notes to friends inside the Grand Garden Arena while the Billboard Music Awards were underway: "It was really funny. We were at the Billboards and Joe, I think, had this idea that he wanted to do this. We had these little black cards that we all got and were randomly inviting our friends like people that we met."

Priyanka Chopra said that eventually DJ Diplo and DJ Khaled turned up for the party and live streamed the wedding on Instagram: "We were like 'Alright, we're going to set up this wedding now. We're going to the chapel right from here and please arrive... please arrive.' So, we had Diplo, Khaled... very sweet, they arrived. They Instagrammed live the whole thing. That was awesome."

Talking about how "epic" Sophie Turner and Joe Jonas' wedding was, Priyanka said: "It was so funny. We were driving around this pink Hummer limo. I was outside the window. It was just epic. I had that long hair extensions that I thought were gonna fly out... it was that kind of a night. Jophie kind of a night."

Last week, while the Internet was busy talking about the Jonas Brothers' first live concert performance and an adorable Nick-Priyanka kiss, Joe Jonas and Sophie Turner slipped in to a chapel in Las Vegas and came out married. The duo had an Elvis Wedding in the presence of an Elvis Presley impersonator as the priest. Pictures and videos from inside their wedding went crazy viral on the Internet.

Seems like Joe and Sophie are having a wedding ceremony in Las Vegas right now! (Via Diplo's instagram story) pic.twitter.com/R2K8tATTPT

Sophie Turner and Joe Jonas got engaged in October 2017.