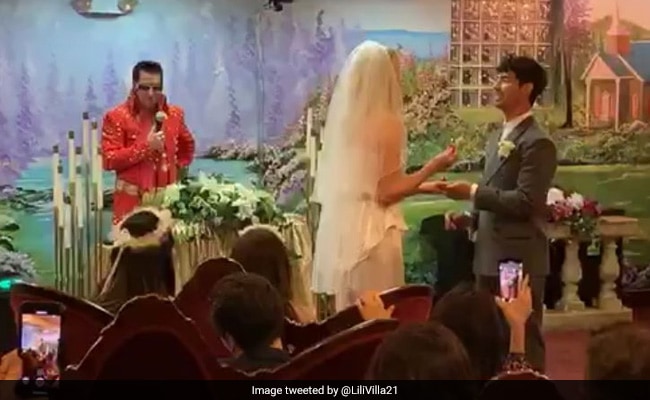 Those who don't follow Diplo on social media are late to Sophie Turner and Joe Jonas' wedding party. Just hours after the Billboard Music Awards concluded at the MGM Grand Garden Arena in Las Vegas, Diplo shared glimpses of what looks like a chapel wedding with Sophie Turner walking the aisle dressed as the bride and Joe Jonas waiting at the alter for her. In his Instagram stories, Diplo appeared to live-stream a part of the Elvis Wedding, which has become a tradition since the King of Rock 'n' Roll's quiet wedding to Priscilla Beaulieu in 1967. As in tradition with the modern Elvis Weddings, Sophie and Joe exchanged their wedding vows in the presence of an Elvis Presley impersonator while singer duo Dan + Shay strummed along to Speechless.

Soon after, ENews confirmed that Joe Jonas and Sophie Turner and Mr and Mrs. As per the report, they acquired their marriage licence soon after the chapel wedding on the night of May 1. In Diplo's videos, there are also glimpses of the other Jonas Brothers standing beside Joe Jonas as his best men. "Gonna hit this wedding real quick," Diplo captioned his video.

sophie and joe really just got married in vegas by a fake elvis using ring pops and it was all live-streamed on insta by diplo pic.twitter.com/DdGegvKANP

Seems like Joe and Sophie are having a wedding ceremony in Las Vegas right now! (Via Diplo's instagram story) pic.twitter.com/R2K8tATTPT

Diplo really streamed while Joe and Sophie were getting married I- pic.twitter.com/jsW9LVGAD6

DID JOE JONAS AND SOPHIE TURNER JUST CASUALLY GET MARRIED AFTER THE BILLBOARD MUSIC AWARDS pic.twitter.com/Bj1SyI5M4c

watching joe jonas and sophie turner get married by an elvis impersonator via diplo's Instagram was not something expected to see in my life time but here we are. pic.twitter.com/LXry1jP1aK

Joe and Sophie getting married by an Elvis impersonator in Vegas really outdid all 64 of nicks weddings.

nick & priyanka literally had 72 weddings & joe & sophie just got married in vegas after an award show. i'm laughing so hard

JOE AND SOPHIE GOT MARRIED WITH..... RING POPS pic.twitter.com/kSd8ZeXa0W

Sophie Turner and Joe Jonas got engaged in October 2017.