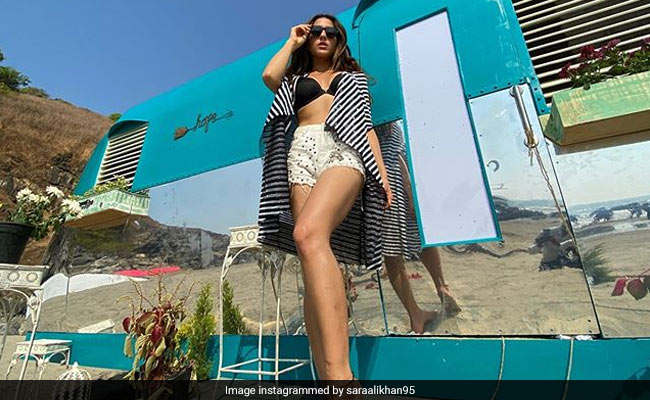 After wrapping up the shoot of upcoming film Coolie No 1, Sara Ali Khan gave us glimpses from her Goa diaries. The actress was shooting in Goa for the film over the past few days. How do we know? Well, she kept sharing snippets on her Instagram story and we just loved it. After Varun Dhawan, who also features in the film with Sara, shared a picture on Instagram from his morning breakfast on Friday, Sara Ali Khan treated fans to a couple of pictures of herself, which appears to be from beach side. The 24-year-old actress looked stunning as she posed gracefully. Looks like Sara took out time for a portfolio shoot and made the most out of her days in Goa. She thoughtfully captioned it: "Hope is a waking dream."

Take a look at Sara's picture:

This is not the only picture that she shared with her fans. Sara had posted a picture on Thursday as well and wrote: "I see you."

Coolie No 1 is a remake of 1995 film with the same name. The previous version of the film featured Govinda and Karisma Kapoor. Varun Dhawan and Sara Ali Khan will be stepping into their shoes in the upcoming film. Coolie No 1 also stars Paresh Rawal, Johnny Lever, Rajpal Yadav and Javed Jaaferi. Varun and Sara will also be sharing screen space for the first time. Coolie No 1 has been directed by Varun's father David Dhawan, who had also helmed its previous version. The film will open in theatres on May 1.