Coolie No 1 New Pic: Sara Ali Khan And Varun Dhawan Right Out Of A Fairy Tale 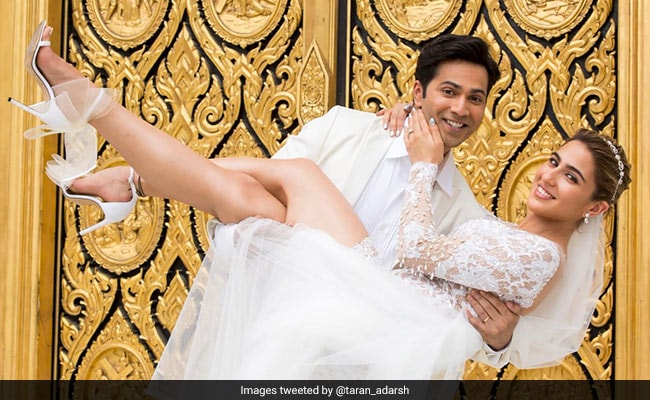 Sara Ali Khan and Varun Dhawan in a new still from the film. (Image courtesy: Instagram)

The new still from Sara Ali Khan and Varun Dhawan's upcoming film Coolie No 1 looks straight out of a fairy tale. The stars occupied the top spot on the list of trends on Thursday after a new picture from their film surfaced on the Internet. In the picture, Sara Ali Khan and Varun Dhawan can be seen dressed as Christian bride and groom. Sara looks stunning in a white dress while Varun looks dapper in a white suit. The new photo from the film has been shared by trade analyst Taran Adarsh and minutes after he posted it, it went crazy viral on social media.

Coolie No 1 is a remake of David Dhawan's 1995 film of the same name, featuring Govinda and Karisma Kapoor in the lead roles. Varun has stepped into Govinda's shoes in the remake while Sara will play the role originally played by Karisma.

Last year, Varun Dhawan and Sara Ali Khan introduced the first look of the film on the actress' birthday. One of the posters showed Varun, dressed as a porter, hugging Sara, who could be seen wearing a cold shoulder dress. In case you haven't seen the first posters yet, take a look now: