Take a look at the first look posters of Coolie No 1 here. 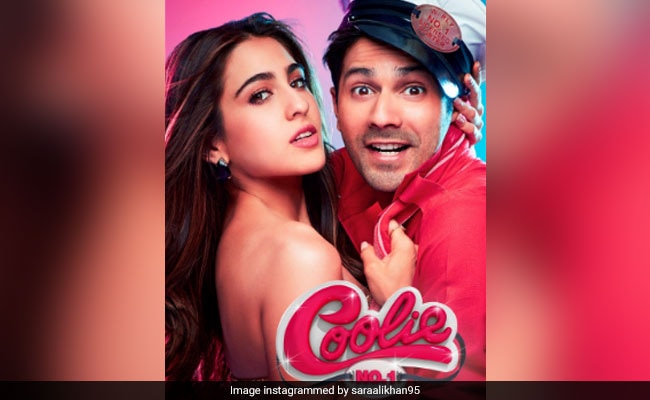 The wait is over for the first look posters of Varun Dhawan and Sara Ali Khan from Coolie No 1. Varun's filmmaker father David Dhawan, who returns to direct the remodelled Coolie No 1, has added oodles of spunk to the look and feel of his new film. In one of the posters, Varun is introduced as the 'Coolie No 1' in a signature red uniform with a white cap - his expression clearly reveals that the film is going to be a laughter therapy for sure. He also features with Sara Ali Khan in another and she looks no less than stunning in a strapless sequinned dress. Sara Ali Khan, who celebrates her 24th birthday today, shared the poster with a birthday wish for herself: "Happy Birthday to me."

Take a look at the first look posters of Coolie No 1 here. Varun Dhawan also dropped a teaser of sorts, which begins with Sara Ali Khan calling out to the 'Coolie No 1' and then has a remixed version of Main Toh Raste Se Ja Raha Tha playing. "Back to the Nineties," a rapper will remind you.

On Sunday, Varun Dhawan reminded us that the first look posters were on their way:

The upcoming Coolie No 1 is a remake of David Dhawan's 1995 film of the same name, featuring Govinda in the titular role and Karisma Kapoor as his love interest. While Varun has stepped into Govinda's shoes in the remake, Sara has been cast in the role originally played by Karisma. Coolie No 1 marks Sara Ali Khan's fourth film announcement.