Last week, Varun had posted this ROFL shaving video to announce he's flying away on Coolie No 1 duty. 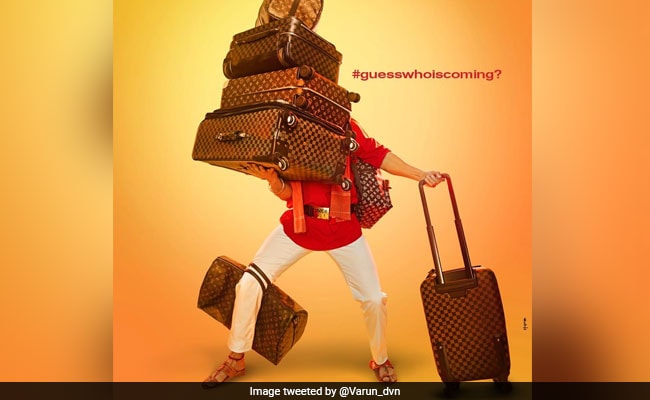 Varun Dhawan in a still from the teaser poster (courtesy Varun_dvn)

Varun Dhawan dropped an important reminder on Sunday and told fans that his much-awaited first look for Coolie No 1 remake is all set to release on Monday. To share the update, Varun tweeted a teaser poster of sorts, in which he can be seen dressed as the iconic 'Coolie No 1' but his face remains hidden behind a stack of bags, which he is struggling to balance. "Mujhe pata hai ki aapko pata hai. Aapko pata hai ki mujhe pata hai. Lekin kya aapko voh pata hai jo mujhe pata hai" he captioned one of his tweets while in another, he added: "Lifting the bags of entertainment." Sara Ali Khan co-stars with Varun Dhawan in the Coolie No 1 remake.

We can't wait for Varun Dhawan's Coolie No 1 first look. Can you?

Lifting the bags of entertainment.#coolieno1pic.twitter.com/CyghR7ThT7

Last week, Varun had posted this ROFL shaving video to announce he's flying away on Coolie No 1 duty. "Do not take life too seriously. You will never get out of it alive. Enjoy karo... Bhai leaving for Coolie No 1," he wrote.

Do not take life too seriously. You will never get out of it alive-Elbert Hubbart. N joy karo bhai leaving for coolie no1 Video- @aalimhakim Edited- @sumit.baruah

In the remake, Varun Dhawan will reprise the role originally played by Govinda in the 1995 release Coolie No 1, directed by Varun's father David Dhawan, who returns to helm the remake as well. In an interview with IANS recently, David Dhawan said he's retained part of the original team for the remake: "After re-watching the original, I started working on the script. For six months, I wondered if I should make it or not. Finally, I decided to adapt it. It's actually a new film. I've worked on it for almost a year with the original writer Rumi Jaffery on the screenplay and Farhad Samji on the dialogue."

The Coolie No 1 remake is expected to hit screens on May 1 next year.