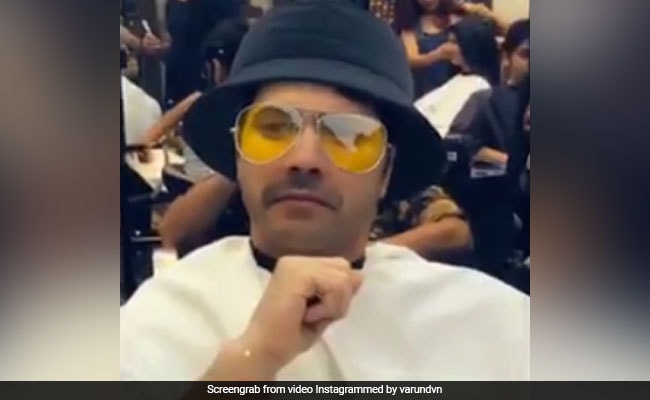 Varun Dhawan in a still from his video (courtesy varundvn)

Varun Dhawan just kick-started his prep for the much-awaited Coolie No 1 remake and he had to had to mark the day with an ROFL video on Instagram. Step 1 to get into the Coolie No 1 mood was to get a clean shave and oh boy, Varun Dhawan just showed us so many things can happen while you are at your stylist's mercy. Varun Dhawan checked into celebrity hair stylist Aalim Hakim's studios and came out as the Coolie No 1 and like we said before, he packaged what happened in between in a hilarious video and shared it borrowing a quote from American author Elbert Hubbard: "Do not take life too seriously. You will never get out of it alive." He added: "Enjoy karo... Bhai leaving for Coolie No 1."

Do not take live to seriously. You will never get out of it alive-Elbert Hubbart. N joy karo bhai leaving for coolie no1 Video- @aalimhakim Edited- @sumit.baruah

Where exactly Varun Dhawan is headed to remains uncertain but David Dhawan has been reportedly scouting for locations in Thailand and has also zeroed in Goa for a shooting schedule.

Varun Dhawan steps into Govinda's shoes, who starred in the original version, the 1995 release Coolie No 1, directed by Varun's father David Dhawan, who returns to helm the remake as well. In an interview with IANS recently, David Dhawan said he's retained part of the original team for the remake: "After re-watching the original, I started working on the script. For six months, I wondered if I should make it or not. Finally, I decided to adapt it. It's actually a new film. I've worked on it for almost a year with the original writer Rumi Jaffery on the screenplay and Farhad Samji on the dialogue."

While Karisma Kapoor starred in the original Coolie No 1, Sara Ali Khan has been roped in for the remake. The Coolie No 1 remake is expected to hit screens on May 1 next year.