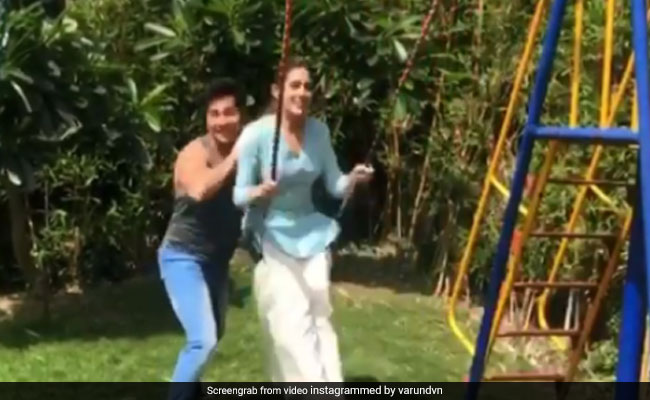 Varun Dhawan and Sara Ali Khan in a still from the video. (Image courtesy: varundvn)

It's never a dull day on the sets of Coolie No 1 and Varun Dhawan's latest Instagram post reminds us of just that. On Tuesday, the 32-year-old actor shared a video from the sets of the film, in which he and his co-star Sara Ali Khan can be seen enjoying the swing ride as he pushes her. In the video, Sara Ali Khan can be seen dressed in a blue kurta and a white salwar while Varun Dhawan can be seen wearing a grey t-shirt and a pair of blue denims. Varun captioned the video: "Fun in the sun." He added the hashtag #CoolieNo1 to the post. Varun's post received over 10 lakh likes within a few hours.

fun in the sun @saraalikhan95 Coolie no1

Coolie No 1 recently featured in headlines after fire broke out on the sets of the Filmistan Studio in the Mumbai suburb of Goregaon. According to news agency IANS, the film incurred losses worth Rs 2 - 2.5 crore due to the fire. However, the losses were reportedly covered under the Rs. 125-crore insurance, which was taken out by the filmmakers before the film went on floors.

Coolie No 1 is being directed by Varun Dhawan's filmmaker father David Dhawan. The film is a remake of the 1995 film of the same name. The original rendition featured Govinda and Karisma Kapoor.