The video was shared by director Karan Johar 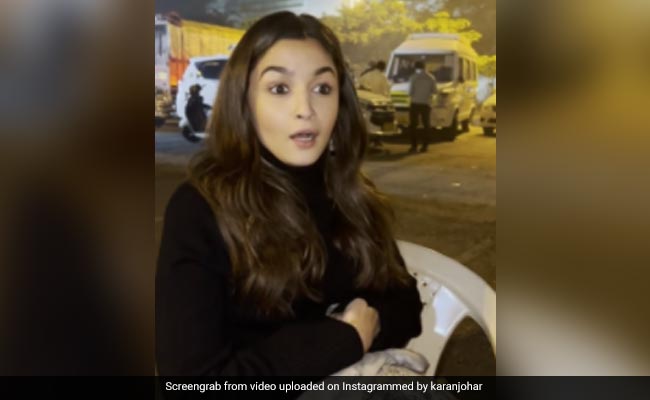 Alia Bhatt in a still from the video. (courtesy karanjohar)

Alia Bhatt found herself at the receiving end of a barrage of questions, courtesy of director Karan Johar. No, this is not a special episode of Koffee With Karan, but just a fun evening on the sets of the duo's next film Rocky Aur Rani Ki Prem Kahani. Between shots, Karan Johar was seen putting Alia in the hot seat as he asked several questions that had the actress fumbling and giggling all at once. The notorious rapid-fire round which Karan Johar called “quick night shoot rapid-fire”, began with him asking Alia what film they were shooting for. Right off the bat, Alia fumbles as she says the name “Rocky Aur Rani Ki Prem Kahani”. To this, Karan Johar says, “Tongue-twister that, right?”

Next, the director asks her, “Where is Rocky?” referring to Ranveer Singh, who is playing the lead role in the upcoming film. To this, Alia Bhatt fumbles once more and says, “Rocky is shooting. Working out, sorry.” To this, Karan Johar quips, “These were not trick questions, Alia, that you are really getting so flummoxed by.” Amid laughter, Alia said, “I don't like rapid fires,” admitting that she was nervous.

Next up is a list of recommendations from Alia Bhatt. Alia's song of the season, she says (in fact, sings) is Diljit Dosanjh's Lover. When Karan Johar asks her to pick a second song as well, she opts for Raataan Lambiyan from Shershaah, which features Sidharth Malhotra and Kiara Advani.

When it comes to movies, Alia Bhatt's film of the season is Sooryavanshi, while Succession is a show she is binge-watching, she revealed.

However, the most heart-warming part of the video comes towards the end, when Karan Johar asks, “Something that you have really, really loved on Instagram that you want everyone to reach out to? What have you watched on Instagram that really moved you?”. After pondering for a few seconds, Alia Bhatt says with a smile, “You winning the Padma Shri,” causing Karan Johar to let out a delightful scream.

And, Ranveer Singh has something to say after watching the clip. “Can't leave you two alone for a second,” the actor wrote. Alia Bhatt's mother, veteran actress Soni Razdan as well as designer Manish Malhotra replied with heart emojis in the comments sections.

Stand-up comic Tanmay Bhat, who has worked with Alia Bhatt in the past, referred to Alia's infamous “President of India” goof-up on Koffee With Karan and wrote, “Was waiting for ‘Who is the President of India?'”

Alia Bhatt and Karan Johar share a special bond given that the director launched Alia Bhatt in the film Student Of The Year in 2012. On multiple occasions, Karan Johar has also referred to Alia as his daughter, with Alia even tying the rakhi for the director's children, Roohi and Yash.

Rocky Aur Rani Ki Prem Kahani will reunite the director-actress duo along with Ranveer Singh. In addition to the lead cast, the film will also feature veteran actors such as Dharmendra, Jaya Bachchan and Shabana Azmi.

Announcing the project on Ranveer Singh's birthday, Karan Johar wrote, “Yes, it's a love story, but no - it's not your regular love story. Rocky and Rani are going to redefine your usual love stories to take you on a journey!”

On the first day of shoot, Karan Johar had shared a behind-the-scenes clip from the set and wrote, “The day is finally here and I have so many feelings going on in my head but what emerges at the top is - gratitude. As we begin our kahani ka first schedule, seeking all your pyaar and aashirvaad. It's time to roll,” giving fans a peek at the look of the lead actors.