"Too many feels to fit in a caption," wrote Alia Bhatt sharing a video from the first day of Rocky Aur Rani Ki Prem Kahani shoot 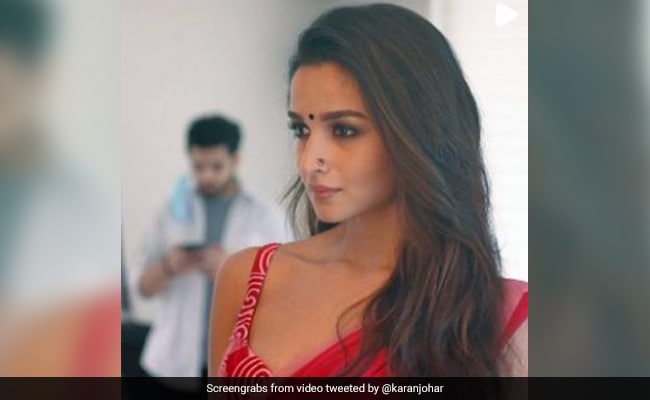 Alia Bhatt and Ranveer Singh kick started the first schedule of their romantic-drama Rocky Aur Rani Ki Prem Kahani on Friday. The stars and the film's director Karan Johar shared glimpses of the first day of Rocky Aur Rani Ki Prem Kahani shoot on social media early morning and thrilled the Internet. In the clip, Alia Bhatt and Ranveer Singh can be seen getting ready for their respective roles while Karan Johar guides them on set. We also get a glimpse of Alia Bhatt's look in the film - dressed in a saree and sporting a bindi. Along with the cast and crew members, the clip also features fashion designer Manish Malhotra. Sharing the video, Karan Johar wrote: "The day is finally here and I have so many feelings going on in my head but what emerges at the top is - gratitude! As we begin our kahani ka first schedule, seeking all your Pyaar and aashirvaad! It's time to roll! #RockyAurRaniKiPremKahani #RRKPK."

Alia Bhatt and Ranveer Singh have previously worked together in Gully Boy. Their film Rocky Aur Rani Ki Prem Kahani was announced on Ranveer's birthday in July. The film also stars Dharmendra, Jaya Bachchan and Shabana Azmi. The trio are the "family" of Rocky and Rani.

Announcing the film on July 6, Alia Bhatt wrote: "An exceptional love story with my favourite people! Presenting - Rocky Aur Rani Ki Prem Kahani, directed by the one and only Karan Johar and written by Ishita Moitra, Shashank Khaitan and Sumit Roy. All set to hit the screens in 2022" and captioned another poster of the film: "A love story that is going to be far from the usual, Rocky and Rani."

She introduced us to the "true pillars of this kahaani" - Dharmendra, Jaya Bachchan and Shabana Azmi - with this post: