"There's always a next time," Ranveer told the fan 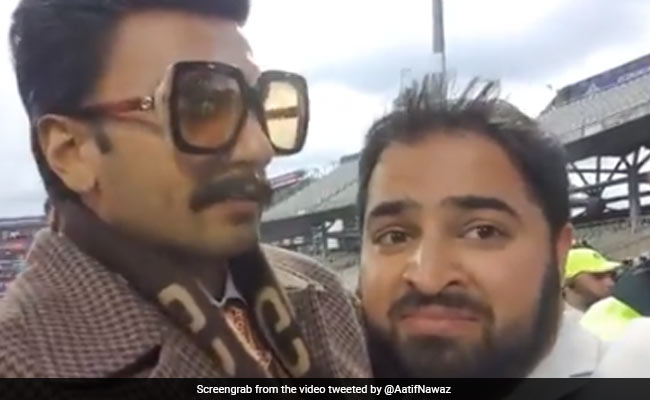 A still from the video (Courtesy: AatifNawaz)

Ranveer Singh's on-field hug of Indian skipper Virat Kohli is not the only moment that created social media frenzy. The Bollywood star also embraced a Pakistan fan and told him not be upset after his country's team lost to India in an ICC Cricket World Cup 2019 match in Manchester. From making his commentary debut alongside cricket stars Sunil Gavaskar and Virender Sehwag to joining crowd and cheering for team India and taking selfies with the Indian players, Ranveer's energetic and fun avatar at the Old Trafford stadium made the match even more special for the spectators.

The men in blue defeated Pakistan by 89 runs (by DLS method) on Sunday. After the match, a lot of Pakistani fans started criticising their team for poor performance. One disheartened fan grabbed Ranveer's attention. In a video that is doing the rounds on the Internet, Ranveer is seen hugging the Pakistan fan.

"Put it there man, put it there. There's always a next time! Don't be disheartened. You played well. Boys are dedicated, committed, professionals and they will be back," the actor said in the video.

The man in the video is London-based Aatif Nawaz. He tweeted: "Indian fans are nice. Thanks Ranveer," he tweeted alongside the video. For those, who don't know, Aatif (34) is a London based stand-up comedian. Besides being a comedian, he is an actor, who has featured in the TV series Don't Stop Me Now and The Big Question. He has also made appearances in Mark Austin's Real Crime and Patients among others.

On the work front, Ranveer is currently shooting for his film '83-- based on India's iconic win in the 1983 Cricket World Cup.