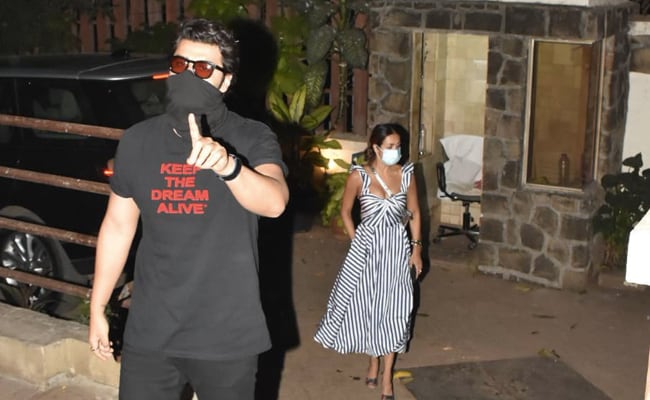 Arjun Kapoor managed to scoop some time out of his busy life and visited his Ki And Ka co-star Kareena Kapoor, who welcomed a baby boy last month. The actor was accompanied by his girlfriend Malaika Arora on Sunday night. Arjun Kapoor happily posed for the paparazzi until he spotted a photographer scaling the wall of the building in which Kareena Kapoor and Saif Ali Khan live. Arjun promptly schooled the paparazzo for his extreme breach of privacy. "Thoda tameez rakho. Woh request kar rahe hain aapse. Yeh galat hai. Aap neeche utro. Aap building ke wall pe aise mat chadha karo," he told the paparazzo.

Arjun Kapoor and Malaika Arora, who reportedly began dating in 2018, are frequently seen making appearances together. They often feature on each other's Instagram profiles. See some of their posts together:

Arjun Kapoor, son of film producer Boney Kapoor and the late Mona Shourie, was last seen in the period drama Panipat along with Kriti Sanon and Sanjay Dutt. He will next be seen in Sandeep Aur Pinky Faraar, in which he will share screen space with Parineeti Chopra. His line-up of films also includes Bhoot Police with Saif Ali Khan and Jacqueline Fernandez. He will also star in Netflix's Sardar Ka Grandson, starring John Abraham, Aditi Rao Hydari, Neena Gupta and Rakul Preet Singh.

Malaika Arora was seen as one of the judges on the TV reality show India's Best Dancer, alongside choreographers Geeta Kapoor and Terence Lewis. She is best-known for her dance performances to songs such as Chaiya Chaiya, Munni Badnaam Hui, Anarkali Disco Chali and Hello Hello among others.