Malaika's caption for this picture is siblings everywhere 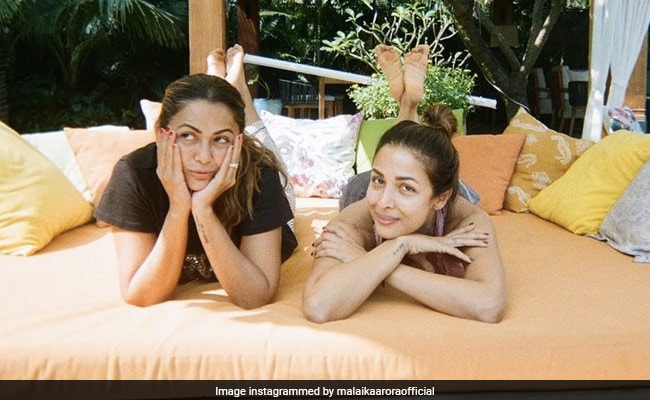 Malaika Arora and her sister Amrita "bond over food." No, we are not making this up. Malaika herself revealed this in her latest Instagram post. On Tuesday, Malaika Arora posted a picture of herself and her sister chilling together and thinking about food. "Amrita thinking what should be her next meal," wrote Malaika Arora and hilariously added: "Me, I ate that meal." LOL. She also added the hashtag #webondoverfood. While Malaika has herself shared in her previous posts that she is a foodie but this picture proves that the Arora sisters are gourmet. The sisters were vacationing in Goa a few days ago.

Malaika Arora and Amrita are actress Kareena Kapoor's BFFs. The trio, as well as Kareena's sister, actress Karisma Kapoor, recently met to hang out together. Sharing a picture on social media, Kareena wrote: "It's been a Fortune of memories ...to new beginnings now #fortunenights #fortuneyouhavebeenkind #endofanera."

A couple of days ago, Kareena Kapoor and Malaika Arora had a dinner party with their girl gang, glimpses of which were shared by the Jab We Met actress on social media. "Reunited. Missing Lolo, Karisma Kapoor," wrote Kareena.

Malaika Arora was previously married to actor-director Arbaaz Khan. They have a son named Arhaan. Amrita is married to businessman Shakeel Ladak.

In terms of work, Malaika Arora is currently seen as one of the judges on the TV reality show India's Best Dancer. She also appeared in the track Hello Hello from the 2018 film Pataakha and is known for her performance in the song Chaiyya Chaiyya from the 1998 film Dil Se....