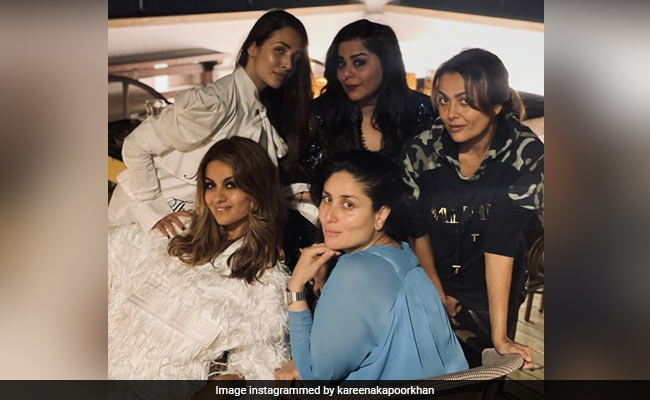 Kareena Kapoor, "reunited" with her girl gang, lit up Instagram on Friday with a stunning picture from their get-together. While Kareena, who is expecting her second child with husband Saif Ali Khan, has been in Mumbai all this time, her BFFs Malaika and Amrita Arora were in Goa celebrating the New Year. After touching down the bay, the squad decided to catch up with each other. Sharing a picture from their dinner night, Kareena Kapoor wrote: "Reunited." The photo features Kareena with Malaika Arora, Amrita Arora, Mallika Bhat and Natasha Poonawalla. Kareena Kapoor's sister Karisma, who is also a part of the squad, was MIA on Friday night. In her post, Kareena Kapoor added: "Missing Lolo, Karisma Kapoor."

Check out the picture of Kareena Kapoor with her girl gang here:

Natasha Poonawalla also shared a picture of her "flock" and wrote: "Can't go through life without your flock, this is mine."

Last year, after the nationwide lockdown, Kareena Kapoor, Malaika Arora and rest of their gang members, except Karisma Kapoor, met and pictures from their outing went crazy viral on social media. Sharing a photo of themselves, Kareena had captioned it: "When worst comes to worst, squad comes first. PS: Karisma Kapoor is missing in action."

Kareena Kapoor and Saif Ali Khan, already parents to a son named Taimur, are expecting their second child this March. The actress recently posted a picture of herself "waiting."