In the caption, Twinkle Khanna admitted that singing is not her strong suit. 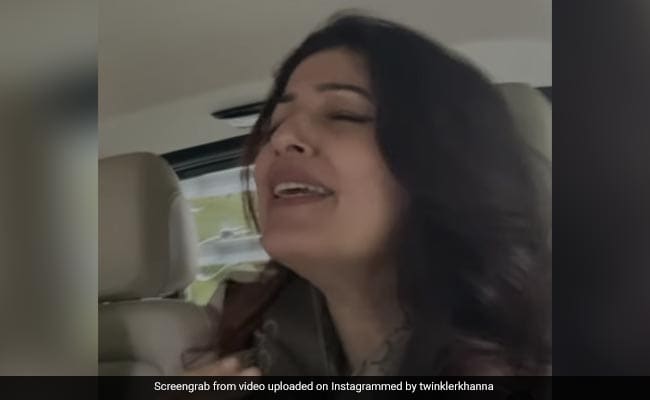 Twinkle Khanna in a still from her post. (Image courtesy: Twiklerkhanna)

Twinkle Khanna is a woman of many talents. Interior designing, writing and even film production, she wears many hats with ease. And, while we love everything about Twinkle Khanna, what we admire the most is her candid charm and honesty. The former actress won hearts on the Internet once again when she shared a video of herself singing. Along with the post, she admitted that singing is not her strong suit but that she loves breaking into a song nevertheless. In the video, Twinkle Khanna, who is in a car, is unabashedly singing the Lionel Richie classic, Hello, is it me you're looking for?

Sharing the video, Twinkle Khanna wrote, “My bit in the family singing competition. Some people have a voice that can shatter glass, but my voice is truly special, I can clearly puncture eardrums without any effort. How many of you love to sing even when you know you are terrible?”

In the clip, you can also hear the voice of a girl, presumably Twinkle Khanna and Akshay Kumar's darling daughter Nitara.

Twinkle Khanna's inspired performance also saw the who's who of Bollywood descend in the comments section. Replying to the clip, Sonakshi Sinha said, “Waiting for the aye coolie upload.”

Referring to the song, Sikandar Kher said, “The person will hang up as soon as they hear hello.” Fans of Twinkle Khanna also dropped heart emojis in the comment section and said that she is not as bad at singing as she thinks herself to be. Now, it is time to take a look at the video:

Twinkle Khanna's Instagram posts are always filled with witty quips and wise messages in the garb of humour. The Mela actress often likes to share exciting details of her life with her Instafam. Recently, on the occasion of Halloween, Twinkle Khanna uploaded a video about how her daughter Nitara celebrated the festival for the first time. Sharing a clip of Nitara going trick-or-treating, Twinkle Khanna wrote, “Our first door to door Halloween with a few tricks and lots of treats!”

Further, Twinkle Khanna quoted the Smithsonian to give her followers some background on the tradition. Read the complete caption here:

A few weeks ago, when Twinkle Khanna was in London, she was seen bonding with her son Aarav over a game of jigsaw puzzle. Admitting that the puzzle was originally intended to be a gift for Nitara from her brother, Twinkle Khanna said that she was “obsessed” with it.

Sharing a clip of the mother-son duo working on the Frida Kahlo puzzle, Twinkle Khanna wrote, “He gets a 1000 piece Frida Kahlo jigsaw puzzle for his little sister but guess who can't leave it alone. My hair is a mess, the dining table is a bigger mess but I am obsessed.”

So what do have to say about Twinkle Khanna and her quirky posts?