Trending: BTS Pic Of Varun Dhawan And Sara Ali Khan From The Sets Of Coolie No 1 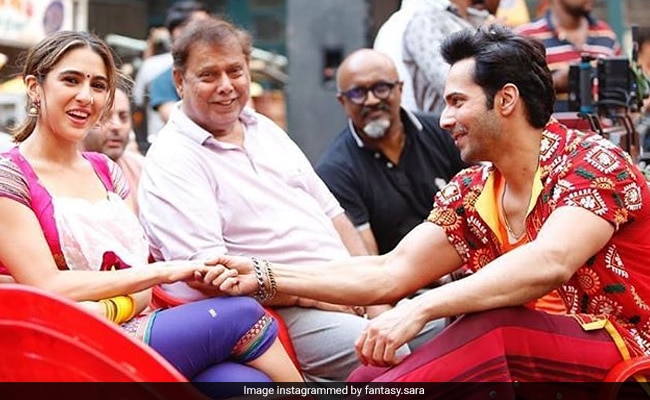 It's never a dull day on the sets of Coolie No 1 and this throwback picture of the film's lead actor Varun Dhawan along with his co-star Sara Ali Khan and the film's director David Dhawan reveals why. The aforementioned picture was shared by several fan pages dedicated to Sara and Varun (there are so many) and is spreading like wild fire on social media. In the picture, both Varun and Sara can be seen dressed in quirky outfits as they hold hands and Varun's father and the film's director David Dhawan smiles away. In the film, Sara Ali Khan will be seen playing Varun Dhawan's love interest.

On Sara's 25th birthday last week, Varun shared a boomerang video from the sets of the film, in which Varun adorably showers Sara with kisses. He wrote: "Happy birthday, Sara Ali Khan. You light up all our lives," adding "Stay PG-13 but number 1 in Raju's heart."

Happy birthday @saraalikhan95. You light up all our lives. stay pg-13 but number 1 in Raju's heart.