Ranbir Kapoor, Alia Bhatt Wedding: Neetu And Rishi Kapoor Got Engaged On This Day. Circa 1979 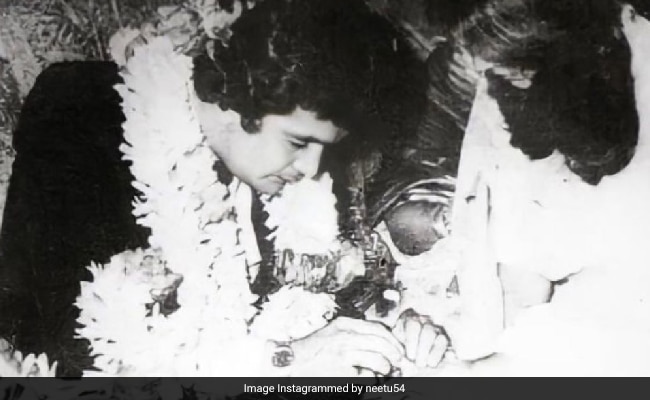 The festival of Baisakhi holds a special place in veteran actress Neetu Kapoor's heart. On this day, 43 years ago, she got engaged to Rishi Kapoor. The duo, who co-starred in several films, dated for three years before they got married in 1980. A day before Baisakhi, Neetu Kapoor made a trip down memory lane and dug out a photo of herself and Rishi Kapoor from their engagement ceremony. The black and white photo shows Rishi and Neetu Kapoor (then Neetu Singh) exchanging rings. Sharing the photo, Neetu Kapoor wrote: “Fond memories of Baisakhi day as we got engaged 43 years back on 13th April 1979.”

The heart icons in her captions showcased her pure love for the photo featuring her late husband. Rishi Kapoor died of cancer on April 30 in 2020.

Neetu and Rishi Kapoor first met on the sets of Zehreela Insaan (1974). They co-starred in films such as Bobby, Amar Akbar Anthony, Khel Khel Mein and Kabhi Kabhie, among others. After their wedding, Neetu Kapoor took a break from films and focused on their family.

The couple were reunited on the big screen in movies like Love Aaj Kal and Jab Tak Hai Jaan. Their last film together was Besharam in 2013, which starred their son Ranbir Kapoor in the lead role.

Neetu Kapoor's photo arrived a day before her son Ranbir Kapoor's wedding with actress Alia Bhatt. The festivities have already begun in Mumbai. The mehendi ceremony is scheduled for today and the wedding will take place on Thursday (April 14).

All the ceremonies will be held at Ranbir and Alia's apartment in Mumbai's Pali Hills, Vastu. Following a pooja, the mehendi ceremony will begin at around 2 pm. The functions will only be attended by family and close friends. The wedding will take place at 3 pm on Thursday in Vastu.