Wedding Or No Wedding, Neetu Kapoor Is Burning Up This Dance Floor

Riddhima Kapoor Sahni has replied with fire and heart emojis 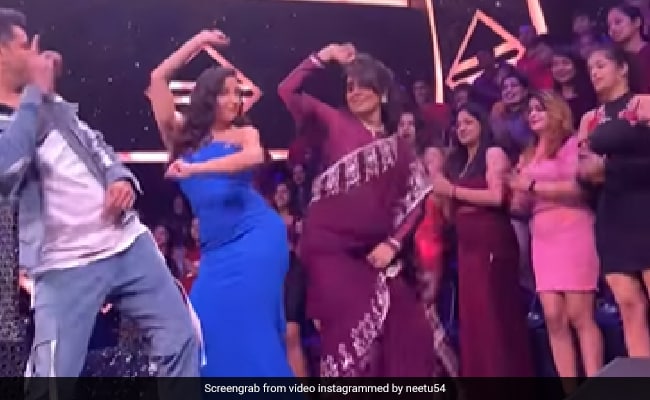 There can never be a dull moment if you have Neetu Kapoor around. Proof? Her latest video on Instagram. It is a dance clip from the sets of the reality show Dance Deewane Juniors. Neetu Kapoor is one of the judges on the show. In the frame, she is dancing with Nora Fatehi and Marzi Pestonji. We can also spot Karan Kundrra, who is the host for this season. They are grooving to the evergreen song  Khulam Khulla Pyar Karenge Hum Dono from the film Khel Khel Mein. The movie featured Neetu Kapoor and her late husband, actor Rishi Kapoor in lead roles. For the caption, Neetu Kapoor wrote, “And, the fun never ends.” Daughter Riddhima Kapoor Sahni has replied with fire and heart emojis. Ace designer Manish Malhotra followed suit.

Neetu Kapoor's dance videos are superhit on the social media platform. Before this, we saw her grooving to Pyaar Do Pyaar Lo alongside Nora Fatehi. Fans, including us, couldn't keep calm. Those expressions are to die for. Neetu Kapoor, in the caption box, wrote, “Little masti on Dance Deewane Juniors.” Nora Fatehi couldn't stop herself from dropping a love-filled comment. She wrote, “How are we so cute. Too much fun.”

Well, if you are thinking that Neetu Kapoor only prefers realtor hits to shake a leg, then you can't be more wrong. A while back, she danced to the tunes of Nach Nach Meri Rani. Oh boy. She nailed it like a pro. “Having fun with my favourites on the sets of Dance Deewane Juniors,” read her caption.

Neetu Kapoor's shoot diaries are all things fun. And, this time it featured her “jaane Jigar” Ranbir Kapoor.

Meanwhile, as per reports, Ranbir Kapoor and Alia Bhatt are all set to get married this week.