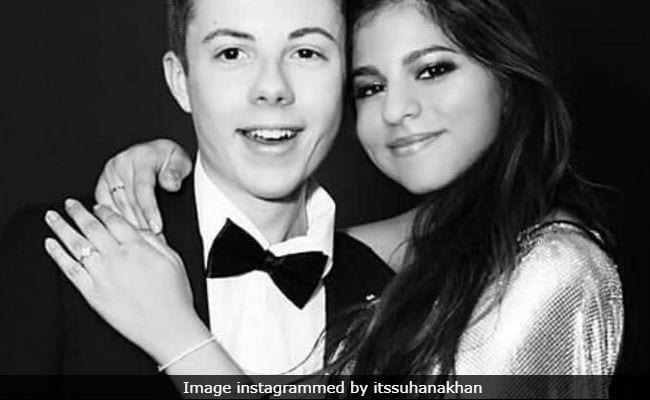 Suhana with her school fellow at a party in England. (Image courtesy: Instagram)

New Delhi: There's more to Suhana's Ardingly party than what was shared by her mom Gauri Khan last week. Gauri visited Suhana at Ardingly in England and shared pictures from a party for the senior students there. "Partying... enjoying the final year of Ardingly," Gauri had captioned the post. But now, the Internet's got hold of a few more photos from the party, which are being circulated by Suhana's fan clubs. In one black-and-white photo, Suhana poses with apparently her school fellow and the Internet's curious to know who the young man is.

Here's the new picture from the Ardingly party:

Suhana looked uber-glam in a sequined Monisha Jaising outfit with a dramatic eye-makeup (and those curls). This is what Gauri Khan posted last week:

Suhana turned 18 on May 22 this year and this is her final year in Ardingly College. Suhana, who wants to be an actor, has to complete her education before entering films, per dad Shah Rukh Khan's instructions. Shah Rukh Khan, who is a force to reckon with in Bollywood, says that his daughter is "extremely good on stage." Last year, clips of Suhana participating in a school play went crazy viral.