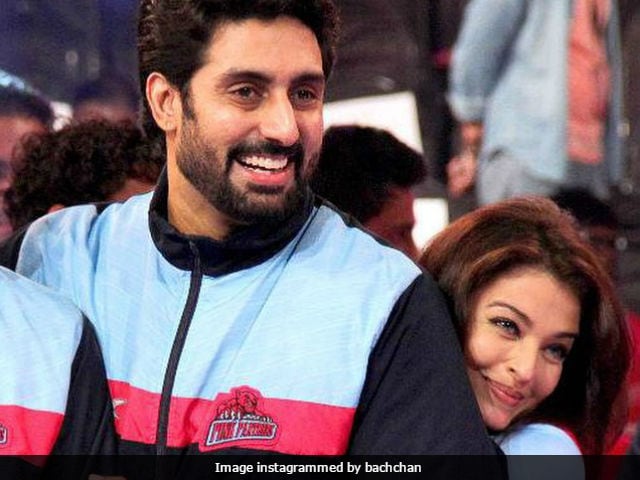 New Delhi: Celebrity couple Abhishek Bachchan and Aishwarya Rai Bachchan rejoiced over India's big win against Pakistan in the ICC Champions Trophy in Birmingham on Sunday. The elated 41-year-old actor posted a selfie along with Aishwarya Rai Bachchan on social media in which they look absolutely adorable. He captioned the image as: "Yessssss! C'mon India!!! #jaihind." The couple is known to be die-hard cricket enthusiasts and is often seen enjoying the sport. Recently, the Dhoom actor was seen supporting Mumbai Indians during the IPL matches. Ahead of the India-Pakistan match, Abhishek shared an old picture in which Amitabh Bachchan is seen cheering for team India along with Sachin Tendulkar and his wife Anjali and the Ambanis. See the pictures shared by the Bunty Aur Babli actor here:

See some of the adorable pictures of the couple which have been shared by Abhishek Bachchan.

Well played boyz!!! As always your spirit is indomitable. And namma chennai supporters are the loudest and best fans. Thank you. #chennaiyinFC #CHE

Last month, Aishwarya Rai Bachchan made headlines as she walked the red carpet at Cannes Film Festival 2017. The 43-year-old actress was accompanied by her daughter Aaradhya Bachchan. Abhishek Bachchan, who was unable to accompany them, shared lovely pictures of the duo complimenting them.

Love this photo..... Oh yes, and the beautiful lady in it too.

Aishwarya and Abhishek have been approached by filmmaker Anurag Kashyap for his next project, titled Gulab Jamun. However, they are yet to confirm.

Promoted
Listen to the latest songs, only on JioSaavn.com
"Yes, Aishwarya and Mani Ratnam are doing a film together. It's a romantic drama, which will be a bilingual and will be made in Hindi and Tamil. The two were in talks for a film for years and it's finally happening," DNA quoted a source as saying.

Meanwhile, Abhishek Bachchan has been roped in by director Ronnie Screwvala for his next film. Abhishek Bachchan's other upcoming projects are - in Nishikant Kamat's next venture, Priyadarshan's Bachchan Singh and Lefty, to be directed by Prabhu Deva.