Amitabh Bachchan Plus The 'Bachchan Bunch.' Can You Spot Abhishek And Shweta In This Throwback Pic? 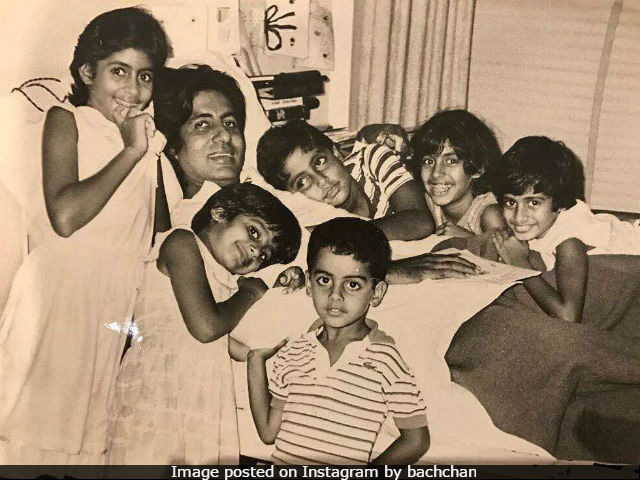 New Delhi: Every Thursday, actor Abhishek Bachchan updates his Instagram followers with a throwback pic. This time, he has posted a picture of the 'Bachchan bunch' with Big B from the mid-80s. The superstar is surrounded by his children Shweta, Abhishek and his brother's children. "I call it Big B and the Bachchan bunch. Dad was hospitalised with Myasthenia Gravis and my sister, cousins and I had gone to visit him," reads Abhishek's post. During that time, Big B was shooting for a Manmohan Desai film in Bengaluru and was rushed to Mumbai's Breach Candy Hospital for the treatment of a rare muscle disease (Myasthenia Gravis). This happened exactly a year after Amitabh Bachchan met with an accident on the sets of Mr Desai's 1982 film Coolie. Big B had suffered serious injuries during a fight scene. "My father was fighting for his life and all I thought about was... why isn't he allowing me to play with these kites?" wrote Abhishek.

#throwbackthursday taken in the mid 80's ( 1985 if memory serves). I call it Big B and the Bachchan bunch. Dad was hospitalised with Mysthenia Gravis and my sister, cousins and I had gone to visit him. Being too young to understand what all was going on our parents always made it out to be like an outing so that we would not be disturbed by the hospital and its workings. When I used to visit my father after his accident on the sets of "Coolie" in 1982, seeing him connected to many drips and machines, he used to tell me they were kites that he had got for me. I was 6 yrs old. My father was fighting for his life and all I thought about was... why isn't he allowing me to play with these kites??? The innocence of childhood I guess.

"Soon after the Coolie accident and almost exactly a year later, in almost the same region around Bangalore, working with the same director, Manmohan Desai, I dropped down while climbing the stairs to my hotel room on location. I could not raise my arms. I could not walk more than a few steps. They rushed me back to Mumbai back to Breach Candy Hospital and I was diagnosed for Myasthenia Gravis, a muscle dysfunctional disorder. The only respite during the time I was bedridden was an emotional Manmohan Desai who called on me and when I told him I may never walk again, said - 'I will make a film with you on a wheel chair.. you will fight from a chair... and act sitting down. He had a never say die spirit," Big B wrote in his blog in the year 2010.

Aaradhya recently made an appearance at Cannes Film Festival with mother Aishwarya and on Sunday, she accompanied her grandfather to meet his fans outside their Mumbai residence.

Promoted
Listen to the latest songs, only on JioSaavn.com
Here's what Big B posted after the Sunday darshan.

Meanwhile, Abhishek Bachchan, who was last seen in 2016's Housefull 3, is prepping for Hera Pheri 3 and Nishikant Kamat's untitled film. Amitabh Bachchan is currently filming 102 Not Outwith Rishi Kapoor. He also has Thugs Of Hindostan in the pipeline. In Thugs Of Hindostan, Big B co-stars with Aamir Khan, Katrina Kaif and Dangal star Fatima Sana Shaikh.