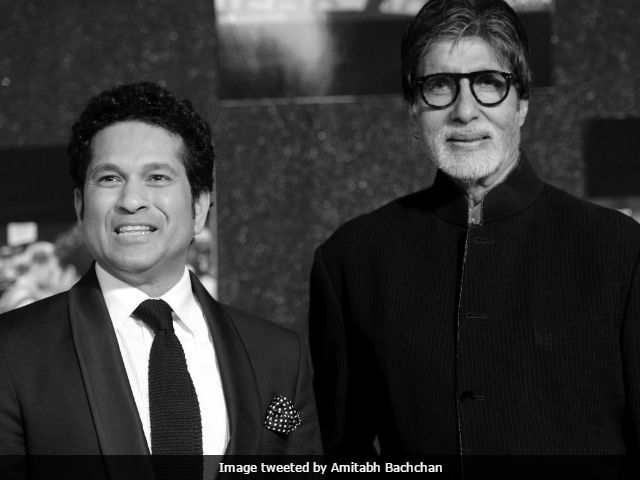 Sachin Tendulkar and Amitabh Bachchan at the screening of Sachin. (Image courtesy: Big B)

New Delhi: Bollywood actor Amitabh Bachchan attended a special screening of Sachin Tendulkar's documentary dramaSachin: A Billion Dreams and was thoroughly impressed by it. The actor tweeted pictures from the screening and wrote: "Sachin: A Billion Dreams movie last night. Filled with pride and emotion. Main uss desh ka vaasi hu jis desh me Sachin behta hai." The 74-year-old actor also praised the cricketer in a post on his official blog saying: "His simplicity and his humility are observed and have been observed a million times but to be the recipient of some of those moments, is truly a cherished desire of a lifetime. I am honoured to know him but I am immensely humbled that he knows me."

Speechless and deeply honoured with your presence for the premiere of my movie. Thank you for your blessings and good wishes. https://t.co/yHlfk5AtCh

Amitabh Bachchan attended the screening with his son, actor Abhishek Bachchan and daughter-in-law, actress Aishwarya Rai. Abhishek was also impressed by the film and wrote on Twitter:

Sachin isn't just a person, he's an emotion... India's emotion! And after they see his film, the worlds emotion. congratulations @sachin_rt

Amitabh Bachchan praised Sachin Tendulkar's style on field in his blog and said: "His command of the game is of course beyond all doubt but what has ever surprised me is his great understanding of the game of cricket." He gave an example: "I had the good fortune to be in a cricket stadium, where both he and I watched a match between India and Pakistan in the famous Eden Gardens, Kolkata. His predictions and his advice on the game every few minutes - where the next ball would be bowled, how the batsman would play what stroke, why the field set was wrong and why it was right and eventually his prediction of where the game was going, was simply unimaginable. It was godlike."

Promoted
Listen to the latest songs, only on JioSaavn.com
Describing Sachin Tendlukar, Big B wrote: "A man that has struck a chord with not just every Indian, but indeed every Cricket playing nation in the world. His glory has been the subject of inspiration and pride for us all in India."

Sachin Tendulkar and his wife Anjali hosted a special screening of Sachin: A Billion Dreams and invited the Bachchans, the Ambanis, Shah Rukh Khan, Aamir Khan and several other Bollywood celebs. Sachin: A Billion Dream, directed by James Erskine, released today. The film features Sachin and his family - wife Anjali and children Sara and Arjun. His colleagues M S Dhoni and Virendra Sehwag also make special appearances in the film.