Amitabh Bachchan's Sunday Darshan Had A Bonus Bachchan - Aaradhya, Who Was 'A Little Afraid'

Aaradhya, who recently handled the attention at Cannes quite in style, told Amitabh Bachchan she was a little afraid to meet his fans at Jalsa on Sunday 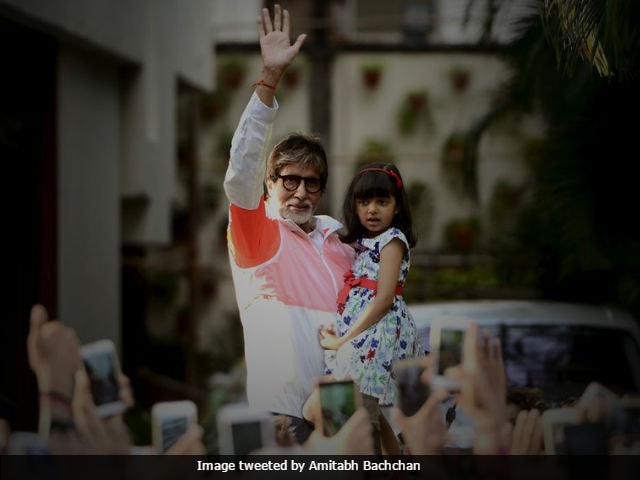 Amitabh Bachchan and Aaradhya at Jalsa. (Image courtesy: Big B)

New Delhi: Amitabh Bachchan's granddaughter Aaradhya, who is all of five, returned from Cannes (which she visits regularly with her mother Aishwarya Rai Bachchan) and had quite a successful trip. Aaradhya (sort of) walked the red carpet and co-starred with Aishwarya in her photoshoots. She met the foreign media and new people and handled all the attention quite in style - just like a Bachchan, to be precise. But on Sunday, she 'reluctantly' accompanied her grandfather to greet his fans, who converge at the doorstep every weekend in huge numbers. Mr Bachchan wrote on his blog: "And the reluctant little one finally agrees to come out to greet the well-wishers but is disturbed by the crowds and admits she was a little afraid to be up there."

Mr Bachchan thinks he lost many 'brownie points' from Aaradhya's accounts book on Sunday. Big B said Aaradhya found a new pet in Jalsa - a cat, she named 'salt pepper.' And Big B revealed what happened next on his blog: "She asked me to pet it and I told her I did not like cats, so she was surprised that I did not.. there is another one she said .. her sister .. the cats sister .. and wondered if I would consider liking the sister .. I said no .. I think I lost out a number of brownie points from her today .. (sic)"

Promoted
Listen to the latest songs, only on JioSaavn.com
Amitabh Bachchan owned a Piranha Dane dog, named Shanouk a few years ago. The dog died in 2013.

Meanwhile, Amitabh Bachchan is currently busy with two projects Thugs Of Hindostan with aamir Khan and 102 Not Out with Rishi Kapoor.