India Vs Pakistan Champions Trophy: Stars like Abhishek Bachchan and Ranveer Singh, who are following the match closely, took some time off to wish Team India luck on Twitter 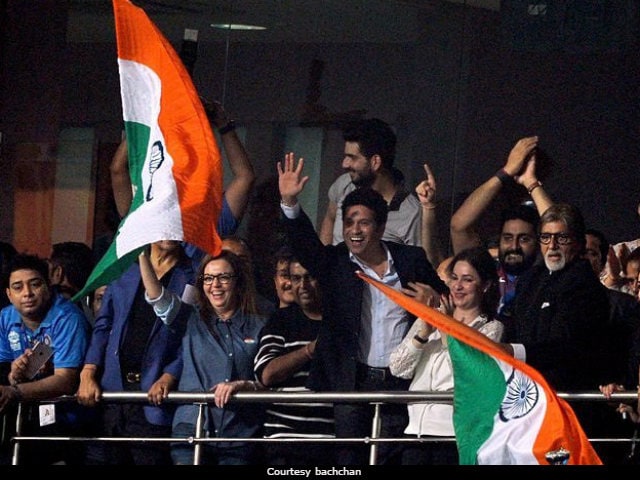 New Delhi: The India Vs Pakistan Champions Trophy match has everybody cheering either for Team Pakistan or Team India, captained by Virat Kohli. Twitter is abuzz with fans tweeting live scores and adding to the thrill of the match in the Edgbaston Cricket Ground. Stars like Abhishek Bachchan and Ranveer Singh, who are following the match closely, took some time off to wish Team India luck on Twitter. "C'mon India, let's do this," tweeted the junior Bachchan while Ranveer also cheered for the men in blue. "Come on India," he wrote. Abhishek also shared an old picture to go with his tweet, in which Mr Bachchan can be seen headlining the cheer-squad along with Sachin Tendulkar and his wife Anjali and the Ambanis, in a previous match. The Bajirao Mastani actor is currently in London but whether he's at the Edgbaston Cricket Ground or not is not known.

This is how celebs are cheering for Team India:

Upon Sachin Tendulkar's arrival at the stadium, Ranveer tweeted:

God has descended on Edgbaston @sachin_rt

Meanwhile, Dhanush, who is at the Edgbaston stadium in London, roped in Sachin for a photo:

At the stadium .. Ind vs pak.. champions trophy :) and got to meet the one and only god of cricket @sachin_rtadrenaline pumping pic.twitter.com/YQclMUwRyS

This is what Rishi Kapoor had tweeted ahead of the match:

Abhishek Bachchan, a sports enthusiast, has also been closely following the Indian Premiere League, rooting for Mumbai Indians, who won the IPL trophy this year.

Promoted
Listen to the latest songs, only on JioSaavn.com
However, Ranveer Singh appears to be a bigger fan of football and was spotted at the finale of UEFA Champions League, whose winners were Real Madrid. "Experience has been magical. Been wonderful to share with you all," he tweeted. This is what he shared from the stadium.

The #ChampionsLeagueFinal2017 experience has been magical! Been wonderful to share with you all! pic.twitter.com/YuukMe2Hkj

Ranveer's London vacation is actually a planned break from the schedule of Padmavati. He left for London after suffering head-injury on the sets of the film. Ranveer co-stars with Deepika Padukone and Shahid Kapoor in the Sanjay Leela Bhansali-directed period piece. Padmavati is expected to release sometime next year.
Comments
India Vs Pakistan Champions TrophyEdgbaston Cricket GroundIndia Pakistan match