Amitabh Bachchan couldn't be more proud of his granddaughter Aaradhya 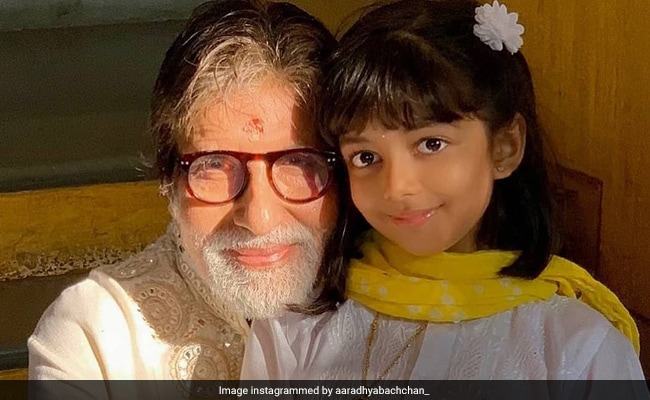 Amitabh Bachchan is a proud grandfather and he has all the reasons to be. The 77-year-old actor shared a snippet of his granddaughter Aaradhya Bachchan's performance at her school's annual day event and tweeted: "The proudest moment and voice.... Of the girl child, of Aaradhya, my own." In the video, Aaradhya, dressed in a saree, can be seen giving a powerful speech on women empowerment. The video was curated by several fans clubs on Instagram and it is spreading like wildfire on social media. In the video, we also got a glimpse of Aaradhya's parents Aishwarya Rai Bachchan and Abhishek Bachchan. Shah Rukh Khan, whose son AbRam also attends Dhirubhai Ambani International School in Mumbai, could be seen recording a video of Aaradhya's performance.

the proudest moment and voice .. of the girl child .. of Aaradhya , my own .. https://t.co/Gsa9gBIgBA

In the now viral video, Aaradhya can be seen giving a powerful speech on women empowerment. She says, "I am Kanya. I am the dream. The dream of a new age. We will awake in the new world. A world where I will be safe. I will be loved. I will be respected. A world where my voice will not be silenced by the ignorance of arrogance but will be heard with the understanding of wisdom. A world where the knowledge will come from the book of life flowing freely through the river of humanity. For we are Naaris, we are Kanyas. We are no less."

Aishwarya and Abhishek Bachchan got married in 2007 and Aaradhya was born in 2011. Aishwarya Rai Bachchan's last release was the 2018 musical Fanney Khan, co-starring Anil Kapoor and Rajkummar Rao, which was a box office debacle. She also dubbed for the Hindi version of Disney's Maleficent: Mistress Of Evil. Abhishek Bachchan and Aishwarya will be seen sharing screen space in their next film Gulab Jamun, which will be produced by Anurag Kashyap.