The pop queen concludes her new music video with a call to sign a petition for the Senate passage of the Equality Act. 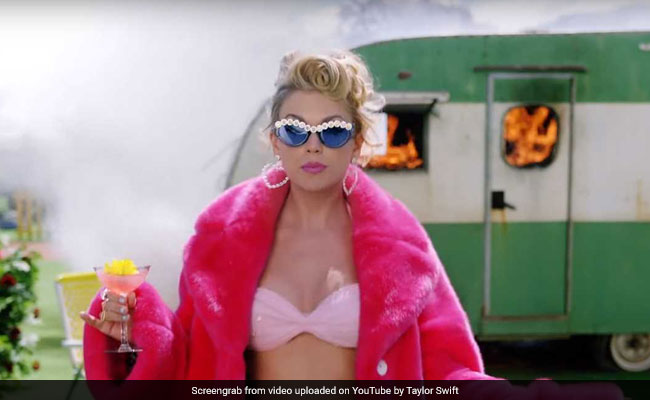 Taylor Swift in You Need to Calm Down. (Image courtesy: YouTube/TaylorSwift)

After studiously skirting political waters for years, Taylor Swift is basically doing the backstroke in the deep end: Her new music video released Monday puts LGBTQ rights center stage, with celebrations of gay culture and marriage - and claps back at the people who oppose them.

Swift's You Need to Calm Down video concludes with an overtly political message asking her fans to sign a petition on Change.org that urges the Senate to pass the Equality Act, which would provide a national ban on discrimination based on sexual orientation. Swift first posted the petition on June 1, the start of Pride Month, and Calm Down helped boost interest. As of Monday afternoon, more than 217,000 people had signed on (including Democratic presidential candidate Sen. Cory Booker of New Jersey, who wrote on the petition page that he was "so grateful" to Swift for starting it).

Of course, since it's Taylor Swift - she of dance-floor earworms and flossy, high-style videos - her dose of politics comes with more than a spoonful of sugar to make it go down easy. Joining her on the three-and-a-half-minute video are A-list gay icons including Ellen DeGeneres, RuPaul, Adam Lambert, Laverne Cox, Jesse Tyler Ferguson, and the cast of Queer Eye. And it wouldn't be a Swift video without a reference to her personal life: The final image is of the singer (dressed as a carton of french fries), embracing fellow popstar Katy Perry (in a hamburger costume), a pairing that serves as a visual hatchet-burying with Perry, with whom she had publicly feuded.

There's a shout out to same-sex marriage - and the gay rights organization that fought for it. "Why be mad?" Swift sings, as the camera pans to a wedding scene for Ferguson and his real-life husband, Justin Mikita. "When you could be GLAAD?

Swift's long-running obsession with "haters" and critics gets translated into a critique of anti-gay protesters, depicted in the video as a snaggletoothed, flannel-clad mob wielding signs bearing cliched slogans like "Adam and Eve not Adam and Steve." "Sunshine in the streets at the parade," she sings, contrasting images of high-camp fun times with their anger. "But you would rather be in the Dark Ages / Makin' that sign must've taken all night."

"Control your urges to scream about all the people you hate," she advises them. "'Cause shade never made anybody less gay."

Swift's evolution from apolitical sphinx who some people claimed was a secret conservative to LGBTAQ activist looks complete. But we shouldn't be surprised - Swift had telegraphed her plans to get more involved, telling Elle magazine in March that she was finally ready to turn up the volume: "I'm finding my voice in terms of politics," she said. (c) 2019, The Washington Post