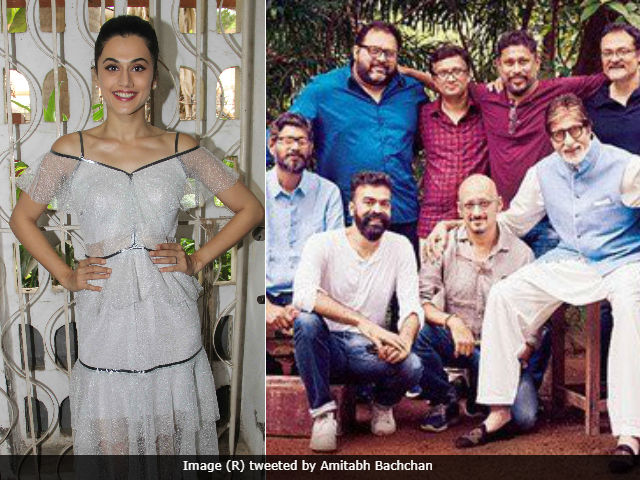 New Delhi: Superstar Amitabh Bachchan recently faced a lot of criticism on social media after he uploaded an all-male picture to celebrate the one year anniversary of his 2016 blockbuster film Pink. Now, Taapsee Pannu, who featured as one of the female protagonist in the film, believes that the 74-year-old actor did not exclude the female cast intentionally. "I 100 per cent know he probably wouldn't have done it intentionally. It's not possible that he deliberately chose a picture in which we weren't there. In fact in all the award functions, after receiving the award he used to always mention 'I want to thank the three girls for this film'," PTI quoted the 30-year-old actress as saying.

"It might have been that it skipped (his mind) or he didn't realise or something. I don't think it was intentional from his side to exclude girls," she added.

See the picture that was shared by Mr Bachchan to mark one year of Pink here:

Sir the woman, about whom this is all about, missing #respect for them too

Not the entire team of PINK. The three female protagonists- they would make it a TEAM.

Where are the Girls ? Who made the characters memorable, they are not in the Team?

Pink won the National Film Award for Best Film on Other Social Issues. In the film, Mr Bachchan featured as a lawyer, who defended three girls, played by Taapsee, Kriti Kulhari and Andrea Tariang.

Ahead of Pink's release, Amitabh Bachchan wrote an open letter to his granddaughters Navya Naveli Nanda and Aaradhya Bachchan in which he asked them to live their lives on their own terms. "Don't listen to those who tell you "how to dress, how to behave, who you can meet and where you can go," wrote the actor.

Promoted
Listen to the latest songs, only on JioSaavn.com
On the work front, Taapsee Pannu is busy promoting her forthcoming film Judwaa 2, which releases in theatres on September 29.