Taapsee Pannu To Her Bikini Critics: 'If You Have The Body, Flaunt It' 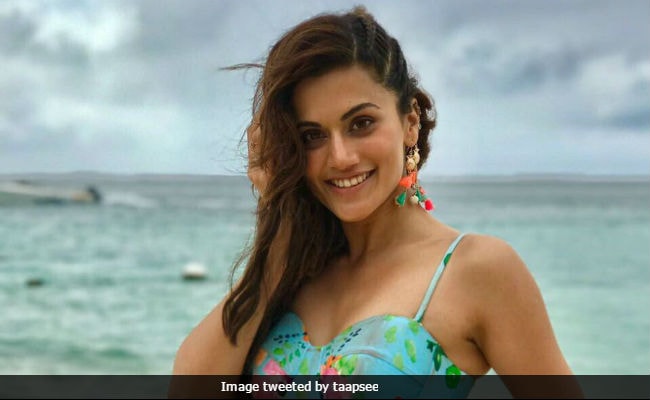 New Delhi: Actress Taapsee Pannu was recently trolled on social media for posting pictures in which she was seen wearing a bikini. The 30-year-old actress shared two photographs of herself on Twitter to promote the song Aa Toh Sahi from her upcoming film Judwaa 2 and a few social media users body-shamed her. However, Taapsee Pannu had a befitting reply to trolls. Speaking to news agency IANS, the actress said that she fails to understand how wearing a two-piece is against Indian culture. "I don't feel shy of being an Indian or following Indian couture. In olden times, people wore minimum clothes. Actresses used to wear really small blouses, bikini blouses and people used to worship (them). Suddenly, it is considered not good and against culture," IANS quoted Taapsee as saying.

"Indian women in general have always been told by someone or the other what to do or what not to do. From the time we are born, we are always told, 'This is what you are supposed to do', without even asking that what we want to do. These people just can't take the fact that how suddenly a woman can have her own opinion," Taapsee added.

Taapsee Pannu, who has worked hard on achieving the bikini body, told IANS, "I always believe that if you have the body to wear a bikini and if you are confident about it, then go ahead and flaunt it. There is nothing wrong in it."

One tweet, which is now unavailable, read: "In our country, we have freedom of expression, so why don't you remove the remaining clothes also. Your brother must be feeling proud of you after watching this," reported IANS. Taapsee responded: "Sorry Bhai hai nahi varna pakka puch ke bataati. Abhi ke liye behen ka answer chalega????"

Here are some of the reactions Taapsee received on her bikini pictures.

Pity on you.
Be a good girl and make your parents proud

Taapsee Pannu, who is eagerly awaiting the release of Judwaa 2, co-starring Varun Dhawan and Jacqueline Fernandez, said that she is 'overwhelmed with the response' she has been receiving from the audience on her glamourous look in the film.

Promoted
Listen to the latest songs, only on JioSaavn.com
"I am very excited with kind of reactions I am getting. People are still coming to terms with the fact that it's me (in the glamorous avatar). It's interesting and I am overwhelmed with the response. I think it's the most awaited movie I have ever been a part of," Taapsee told IANS.