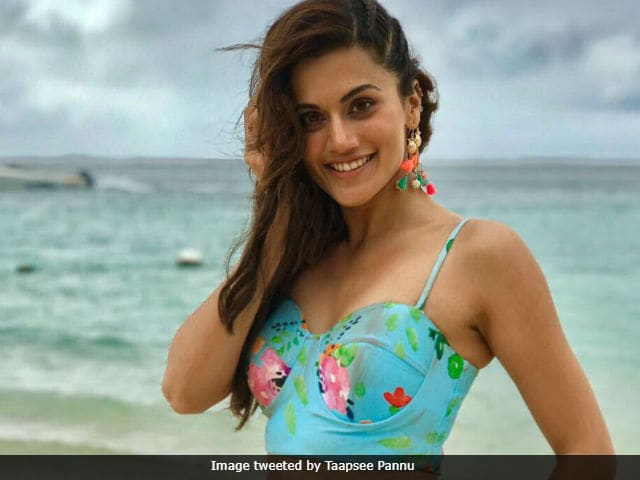 New Delhi: Taapsee Pannu will not be bullied by the social media trolls. No, sir. Some Twitter users picked on Taapsee due to the promotional pictures (in which she's wearing a bikini) she shared from her upcoming film Judwaa 2 but the 30-year-old actress gave them replies which deserves a slow clap. One tweet, which is now unavailable, read: "In our country, we have freedom of expression, so why don't you remove the remaining clothes also. Your brother must be feeling proud of you after watching this," reports news agency IANS. To this Taapsee replied: "Sorry Bhai hai nahi varna pakka puch ke bataati. Abhi ke liye behen ka answer chalega????"

The other conversation went as follows:

Gndi??? I knew I should've washed that sand off me. Next time I will take care. I 'aaplog' for that https://t.co/291ePztnlP

Are we done trolling actresses and models for their choice of clothes now?

In the last few months, actresses Fatima Sana Shaikh and Soha Ali Khan had been shamed for their outfits - which the self-appointed moral police of the social media deemed inappropriate for the occasion. Fatima posted a picture of herself sunbathing at a beach on Instagram and folks were outraged because she posted the picture during Ramzan. In case of Soha Ali Khan, the Internet was upset with her for wearing a sari for her baby shower (in Bengali style) which coincided with Eid celebrations. "Shame on you, you are not Muslim," read one tweet.

Promoted
Listen to the latest songs, only on JioSaavn.com
Actresses Deepika Padukone was also shamed for the outfit she wore in a photoshoot. She replied by posting more (and similar pictures) without any comment. Similarly, Priyanka Chopra was criticised for wearing a short dress when she met Prime Minister Narendra Modi in Berlin.

Taapsee Pannu will be seen in the aforementioned Judwaa 2, co-starring Varun Dhawan and Jacqueline Fernandez, releasing later this month. (With inputs from IANS)