Soha Ali Khan wore a sari for what her followers are guessing was a traditional Bengali baby shower. Handful of comments appear to berate the actress for wearing a sari and for not posting an Eid greeting 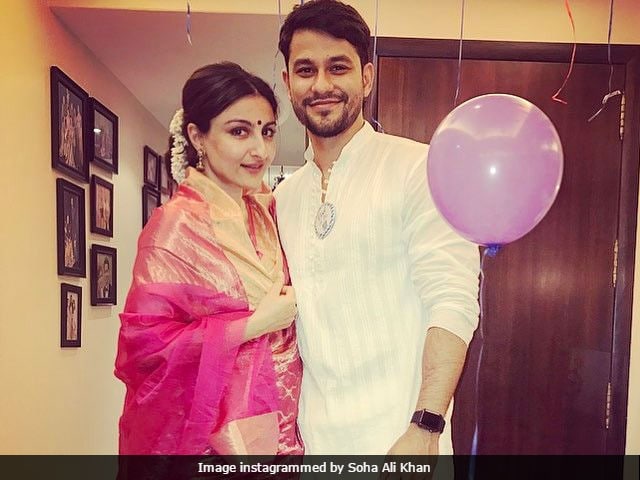 New Delhi: Actress Soha Ali Khan has been accused of not being Muslim enough in the comments thread of a picture she posted on Instagram. In the photo, shared yesterday, Soha wears a pink sari and poses with husband Kunal Khemu. The 38-year-old actress is pregnant and while she didn't reveal what the occasion was, her followers are guessing that she was dressed for a traditional Bengali baby shower - Soha's mother Sharmila Tagore is Bengali. Most comments on the post are in praise of Soha's sari and the picture itself - but a handful of comments, in the vein of "shame on you, you are not Muslim," appear to berate the actress for wearing a sari (the unspoken criticism is that she should have worn a sharara or other forms of dress considered appropriate Eid wear) and for not posting an Eid greeting.

Several other comments defend Soha Ali Khan's right to wear what she pleases and reject the notion that her choice of outfit should be seen as a cultural betrayal. The post has over 50,000 likes so far.

It isn't a party without balloons ! @khemster2

Just a month ago, Fatima Sana Shaikh was similarly trolled on Instagram for wearing a swimsuit during Ramzan - Fatima, currently in Malta filming Thugs Of Hindostan, had posted a photo of herself on a beach.

Promoted
Listen to the latest songs, only on JioSaavn.com
Actresses Deepika Padukone and Sunny Leone were also recently shamed for outfits they wore in photoshoots.

Soha Ali Khan is the sister of actor Saif Ali Khan and the daughter of Sharmila Tagore and late cricketer Tiger Pataudi. She debuted in 2004's Bengali film Iti Srikanta and has starred in acclaimed projects such as Rang De Basanti and Antarmahal. Soha and Kunal Khemu married in January 2015 and are expecting their first child.