Kapil Dev could not stop laughing even when the cameras rolled, which made producer Preeti Simoes stop the shoot for a while 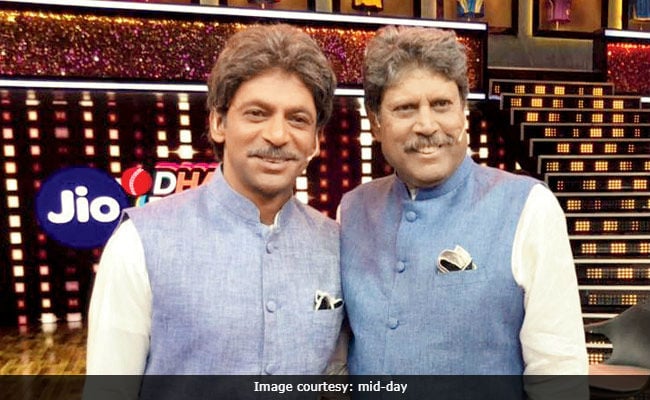 Mumbai: Sunil Grover's recent imitation of Kapil Dev on Jio Dhan Dhana Dhan left the legendary cricketer in splits. He could not stop laughing even when the cameras rolled, which made producer Preeti Simoes stop the shoot for a while. Sunil not only dressed like Kapil, but imitated him perfectly. As Kapil said, "Sunil ka jawaab nahin."

The show shows a different side of Kapil and people have been appreciating his comic timing. "I think with comic timing, either you have it or you don't. When you become captain, you curve yourself to say so many things. The game we have are playing i.e. cricket in India, every single match we have played is covered by the media and is watched by the people. So people, feel this is me. But I would like to tell them that this is me. Now, I have reached this stage, I know who am I and what I like to be," he says.

It Feels so great to make the legend laugh.

Kapil is a big fan of actor Sunil Grover, who plays the role of professor LPW in the show. "I think he is a huge talent, without a doubt. He is one of the most talented actors or you can say comedians today. He has the perfect sense of timing and his facial expression is fantastic. I personally feel he should keep on doing different roles altogether because he has the talent and ability to excel," he says.

(This story has not been edited by NDTV staff and is auto-generated from a syndicated feed.)
Comments
kapi devsunil groversunil grover comedy