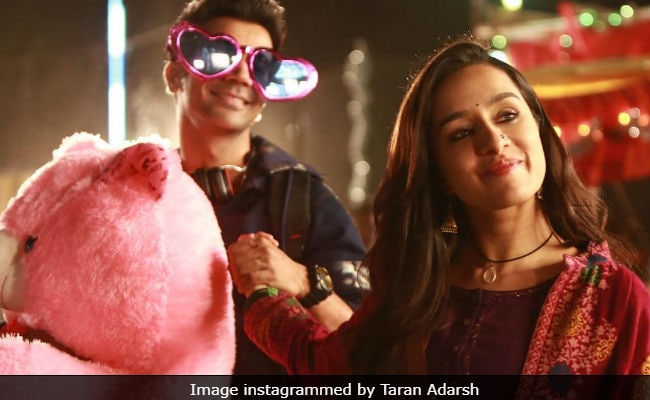 Actress Shraddha Kapoor's latest film Stree crossed the Rs 100 crore-benchmark before on Saturday, reports trade analyst Taran Adarsh. The film entered third week of its box office run on Friday when new films such as Manmarziyaan, Love Sonia and Mitron released. Stree's decent performance on the ticket window had an impact on the collection of Manmarziyaan, which has manged to collect a little over Rs 8 crore in two days. "And Stree hits a century... crosses Rs 100-crore mark... This one's a lottery for its investors," Taran Adarsh tweeted. Stree, starring Shraddha Kapoor, Rajkummar Rao and Aparshakti Khurrana, is directed by Amar Kaushik.

Shraddha Kapoor, super-thriled with the success of Stree, shared a video on Twitter and wrote: "Thank you for all this love. Words aren't enough."

Thank you for all this love. Words aren't enough @RajkummarRao#DineshVijan@PVijan@amarkaushik@TripathiiPankaj@Aparshakti@nowitsabhi@MaddockFilms#D2RFilms@krishdk@rajndk@JioCinemapic.twitter.com/rYUtKnh8uj

By the second weekend, Stree had collected Rs 82 crore:

Stree is based on a urban legend, in which a ghost (named Stree by the villagers) is suspected to be behind the mysterious disappearances of the men. The film received fabulous reviews and NDTV reviewer Saibal Chatterjee wrote: "Stree plays an unwavering hand in demonstrating that dread can be unbridled fun when it serves a larger thematic purpose."

With the success of Stree in her kitty, Shraddha Kapoor now awaits the release of batti Gul Meter Chalu, in which she has been cast opposite Shahid Kapoor. The film deals with the issue of electricity theft and it also stars Yami Gautam in a pivotal role.